Home Woman Fake Meat Is Here to Stay So Stop Treating It Like a... 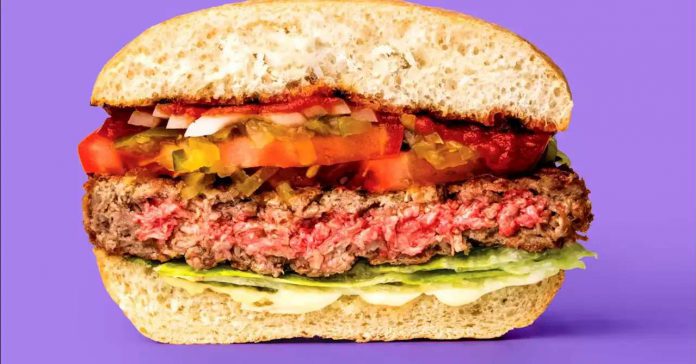 When a Burger King manager sent customers beef instead of the Impossible Burger, he was buying into the assumption that it’s just a trend

nacho-cheese-topped fries
before it, is the hot new thing on fast-food menus. It’s no surprise then that these chains would see the product more as a trend to capitalize on rather than a necessary option for a large swath of consumers.
It doesn’t help that Impossible Foods has marketed itself as a meat substitute for meat eaters, the gateway food into reducing your meat intake, or perhaps giving it up altogether. Rather than highlighting vegetables, grains, and pulses on their own, Impossible uses plants to explicitly recreate the texture of meat, something not every vegetarian wants. They even call it “meat,” which
cattle ranchers are trying to fight
. Impossible — and other brands like it — make it clear they’re not marketing directly to vegetarians, who already know how many options there are to make a good, meatless burger.
But some people need a vegetarian sandwich in a way they don’t need a Grand McExtreme Bacon Wonder; it’s irresponsible to treat the meat-substitute burger like it’s just another gimmick. And the centering of meat-eaters in both a meatless industry and in the fast-food world means these sorts of mixups are bound to happen more often. Instead of assuming a customer doesn’t want meat, it becomes easy to assume they are just curious about a trend, and would happily eat meat given the option.
Impossible Foods and other fake meat companies bank on the concept of their products
being indistinguishable from meat
. The whole point is getting people to give up eating meat by promising them they don’t have to “give up” anything, that the experience will stay exactly the same. The idea that fake meat and real meat are interchangeable, and that everyone ordering an Impossible Burger is approaching it like the next must-have stunt-food item, is what allowed the manager at Burger King to lie to his customers. You don’t have to be a vegetarian person to order a vegetarian meal. But let’s not assume that everyone secretly wants meat.
•

Two Sisters and the Terrorist Who Came Between Them