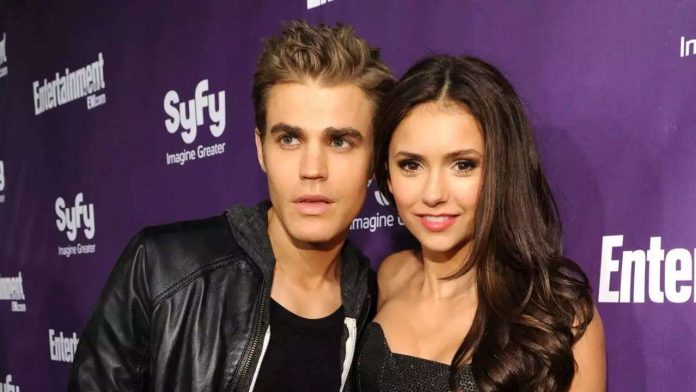 It wasn’t until after they starred as a couple that Wesley grew on her.

— but they”despised” each other on set.
On Monday’s episode of Candice King and Kayla Ewell’s
Directionally Challenged
podcast, Dobrev reflected on joining the CW series 10 years ago, and revealed that her relationship with Wesley has come a long way since they first starred as Elena Gilbert and Stefan Salvatore.
“Paul and I didn’t get along at the beginning of the show. I respected Paul Wesley, I didn’t like Paul Wesley,” the actress dished, sharing that she was shocked by how their chemistry played off on screen. “I remember everyone would walk up to me after the show aired and they’d be like, ‘Are you and Paul dating in real life?'”
“Everyone thought that we had such good chemistry. I realize now that there’s a fine line between love and hate and we despised each other so much that it read as love but… We really just didn’t get along the first five months of shooting,” she recalled.
Dobrev’s experience with Wesley is a common one for actors, she explained.”Most of the time, love interests in film and TV don’t get along and that reads as really intense chemistry,” she said.
“Maybe we had a moment where we actually connected, and he looked at me and he was like, ’10 years from now, when we’re not on this show, you’re gonna really miss me. You’re gonna miss these times; you’ll look back, and this is gonna be the good old days. We’ll appreciate each other in 10 years,'” she recalled.
“He was so f**king right. We ended up getting to a good place and it was fine,” Dobrev said.”Of everyone, I think I probably see him the most and hang out with him the most. We’re probably the closest. We hang out a lot. We’re really good friends. I love his wife. It’s so funny how time changes everything because I never thought he would be one of my best friends.”
Dobrev has also
, who played Damon Salvatore on
Vampire Diaries.
Elena and Damon ended up dating on the series, and Dobrev and Somerhalder dated in real life from 2011 to 2013.
See more in the video below.
GET THE ET NEWSLETTER