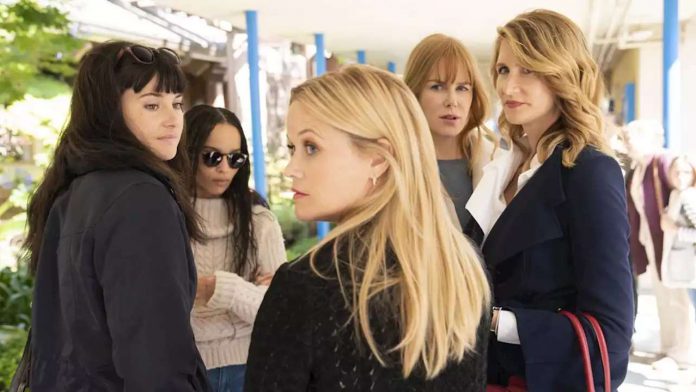 —Nick, Joe, and Kevin—are reunited and back with new music, they’ve got a new documentary too.
Chasing Happiness
follows the group’s rise to stardom from the beginning, exploring to their brief hiatus (they broke up in 2013) and ensuing comeback.
Black Mirror
(Season Five), Netflix, June 5
The fifth season of the hit series—which is all about the deep, dark dangers of technology—stars Miley Cyrus, Anthony Mackie, and Topher Grace. There are only three episodes in the season (it’s a fast binge), but each one has its own distinct vibe and looks mysteriously intriguing.
The Handmaid’s Tale
(Season Three), Hulu, June 5
The third season of the show, based on Margaret Atwood’s novel, will continue June’s (Elisabeth Moss) gripping journey. Last season, she decided not to flee Gilead; perhaps a handmaid rebellion will finally come? Blessed be the fruit.
Tales of the City,
Netflix, June 7
This new series starring Laura Linney is based on Armistead Maupin’s beloved novel series of the same name, which is considered an LGBTQ+ classic. The story features a woman, Mary Ann Singleton, who returns to San Francisco after a long absence to reunite with old friends and family at 28 Barbary Lane. (Olympia Dukakis stars as her landlady, and Ellen Page plays Singleton’s daughter.)
I Am Mother,
A sci-fi thriller starring Hilary Swank, Rose Byrne, and Clara Rugaard,
I Am Mother
envisions humanity’s mass extinction. A teen, who is raised in isolation by a “maternal droid” (voiced by Byrne), finally encounters another human—who proceeds to send the world as she knows it into a tailspin.
Big Little Lies
(Season Two), HBO, June 9
Two words: Meryl. Streep. The second season of
Big Little Lies
will feature the acclaimed actress, and if that’s not enough for you, the “Monterey five” are back as well: Nicole Kidman, Reese Witherspoon, Zoë Kravitz, Shailene Woodley, and Laura Dern. The show will navigate their characters’ intertwined lives in their town of Monterey, California, as they try to cover up the death of Alexander Skarsgård’s character, Perry. Streep plays his mother, who is suspicious of the group.
Murder Mystery,
There’s always a guilty pleasure on the list, and for June it’s
Murder Mystery,
starring Jennifer Aniston and Adam Sandler. The feature film stars Aniston and Sandler as a couple vacationing in Europe who boards a billionaire’s yacht party only to witness a murder. It’s up to them, naturally, to solve the mystery in this comedic whodunit.
Euphoria,