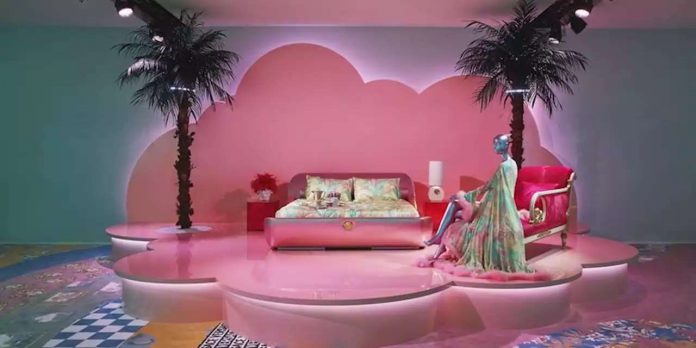 From Raf Simons’s latest to Versace’s extraordinary Instagram bait, the best of the Milan design fair.

Installation view of “Weaving the Cosmos.”
Photography by Studio Tomás Saraceno, © 2019
Bulgari took over 11,000 square feet of the Indro Montanelli Public Gardens, presenting two installations at the intersection of design, art, and science. The Italian luxury label showcased the Argentine artist Tomás Saraceno’s delicate spiderweb works inside the Civico Planetario Ulrico Hoepli for an exhibition titled “Weaving the Cosmos,” while celebrating the 20th anniversary of Bulgari’s iconic B.zero1 design by showcasing the rings in an illuminated tunnel in the planetarium’s surrounding gardens.
COS x Mamou-Mani
Pinterest
Installation view of Mamou-Mani x COS at the Palazzo Isimbardi.
COS returned to the courtyard and gardens of Palazzo Isimbardi once again, this time teaming up with Mamou-Mani Architects on an installation created with 3-D-printed bricks made from the compostable bioplastic PLA. Arthur Mamou-Mani said he wanted to evoke “a feeling of lightness, porosity…something that also feels a little natural, bringing nature inside the courtyard.”
Versace Home
Pinterest
Sasha Bikoff and Andy Dixon’s installation at the Versace Palazzo.
Versace Home went back to its roots, setting up the label’s 2019 Salone del Mobile presentation inside the Versace Palazzo, calling on two creatives, the Canadian artist Andy Dixon and the American interior designer Sasha Bikoff, to help bring the new collections to life. Bikoff created a candy-colored tropical fantasy furnished in Versace Home, while Dixon made enormous shirt sculptures decorated with his own version of Versace’s flamboyant prints. Upstairs, Versace Home exhibited its latest collections of furniture and tabletops, as well as a new lifestyle line complete with Versace skateboards, dumbbells, and kettle bells. Who says working out can’t be luxurious?
Tadao Ando: The Challenge at Armani/Silos
Pinterest
An installation view of the Ando exhibition at Armani/Silos.
“I chose Tadao Ando for the sense of purity in his architecture, his meticulous use of materials, and his dialogue between water and light, that, even in heavily crowded spaces, reminds us that nature is never far away,” wrote Giorgio Armani about the Japanese architect
Tadao Ando
, whom he commissioned to create the Armani/Silos exhibition space, which is also the location of a survey of the starchitect’s work that’s on view until July 28. The Ando retrospective showcases the master of minimalism’s blueprints, maquettes, sketches, and more from various projects, including his 9/11 Memorial proposal, his models for the art-filled Naoshima Island, and his plans to convert Paris’s Bourse de Commerce into the new home of the Pinault Collection.
Knoll x Bauhaus 100th Anniversary
Pinterest
A Bauhaus-inspired collage by OMA.
Salone wouldn’t be complete without a tribute to the 100th anniversary of the Bauhaus, the legendary German art school known for combining crafts with fine art. Knoll teamed with the architect Rem Koolhaas’s OMA to curate an exhibition with Domitilla Dardi that presented the Bauhaus’s greatest hits, from the Bauhaus student and teacher Marcel Breuer’s iconic Wassily chair to Ludwig Mies van der Rohe’s legendary Barcelona chair.
Dimore Studio for Dior

life on Instagram “70 years ago this week from the June...