Home Woman What Is Going on With Lori Loughlin’s Bizarre Crisis PR Strategy?! 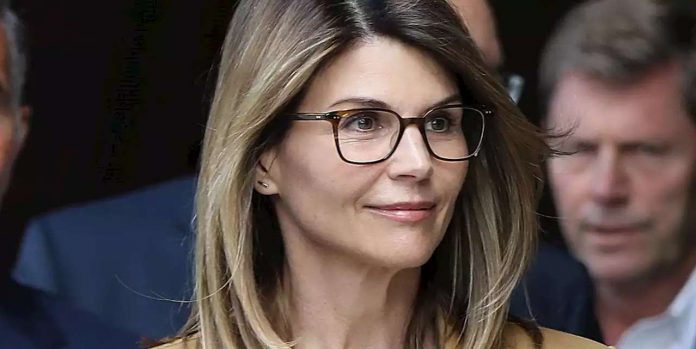 People
,
from an undisclosed informant:”While waiting for this to come to some conclusion, she’s trying to keep a somewhat regular schedule—going to yoga and pilates and seeing friends for lunch.”
These speculative, intimate details delivered to press during a scandal are called a”leak campaign,” and often come directly from the celebrity’s camp, longtime Hollywood crisis manager and the author of
Where’s My Fifteen Minutes?
Howard Bragman tells ELLE.com.
In Loughlin’s case, the public relations ploy seems to be backfiring.”It hasn’t created any sympathy for her… It’s actually reinforced everything people think about celebrities, that they have money and don’t have to play by the same rules as everyone else,” Bragman, who has worked with Barry Manilow and Monica Lewinsky, says.”Sometimes in situations like these, it’s best to shut up.”
Loughlin fans hold up photo masks of the actress outside federal court.
Paul Marotta
Getty Images
Bragman doesn’t represent Loughlin, but has known her”for years” and believes a disjointed public relations strategy is to blame for the”particularly bad” scandal fallout and ensuing leak campaigns.”[Her team isn’t] working together,” he says.”They should have stuck to a strategy and had humility.”
Instead of showing up to her first court appearance in what appeared to be full hair and makeup, smiling like it was”a People’s Choice Awards red carpet,” Bragman says, Loughlin’s sartorial choices and demeanor should always reflect the seriousness of the charges she faces: mail fraud and money laundering conspiracy.
“If you’re possibly going to jail, I think your posture should parallel that,” he says.”The optics didn’t help, you have to look like it’s the worst day of your life. I don’t think there’s sympathy for her.”
Loughlin’s publicist Elizabeth Much tells ELLE.com they have decided not to hire an outside crisis PR team and that, for now, her client’s focus is on the legal case.
“I don’t think there’s sympathy for her.”
While Loughlin has remained mum on the scandal, Felicity Huffman immediately apologized for her involvement and took responsibility for her actions. The
Desperate Housewives
public apology
, expressing”deep regret and shame,” and pleaded guilty on Monday, admitting to paying $15,000 to have her daughter’s SAT scores altered.
“I don’t feel there was an understanding in those moments [by Loughlin or her team that] humility serves you well,” Bragman says.”You’ve got to be aware of who you are and what the risks are. Lori had more to lose. Felicity played edgy characters [as an actress], but Lori was Aunt Becky in
Full House
, queen of the Hallmark channel.”
Huffman arriving in court on May 13.
Getty Images
Us Weekly
‘s latest sourcing that Loughlin believes she can avoid jail and”return to work,” a comeback at this point is”unlikely,” says Hollywood crisis communications expert Danny Deraney, who has worked closely with several women involved in the #MeToo movement.
“Hugh Grant was caught with a prostitute and he went on television and owned up to it, made himself the butt of the joke, and things went back to normal. More often than not these things will be okay,” Deraney tells ELLE.com.”Felicity could have a career again, but all Lori is doing is making things worse for herself.”
The key to handling a celebrity crisis, he says, is knowing,”that they doesn’t owe anyone a response, that they don’t need to talk.”
“Whoever is leaking these stories is doing her a disservice, they need to stop,” Deraney says,”When it comes to celebrities, we’re more apt to forgive when the person is humble, immediately.”