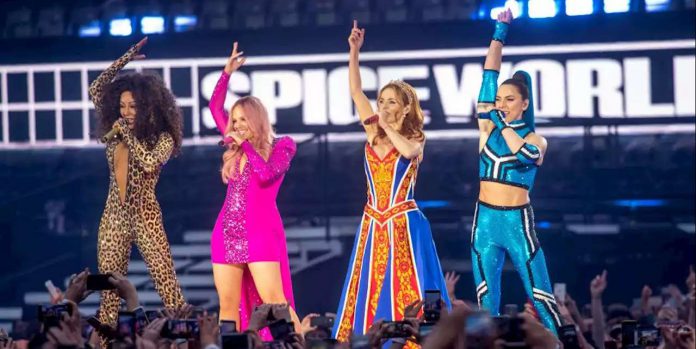 a bumpy start
. The British girl group (sans Victoria Beckham) kicked off their world tour in Dublin, Ireland, but the concert left many disappointed due to sound issues. Fans explained the issues over social media, with many complaining of feedback, delays, and being unable to hear the women at all. Some were so upset over the show that they
walked out
of the stadium.
Mel B was the only member of the group to address the situation in an Instagram story later that night.
“Hey guys, thank you for attending our show tonight in Dublin,” she said. “We will see you in Cardiff and hopefully the vocals and the sound will be much, much better.”
Despite the sound problems, the set list had all the spicy hits, including “Spice Up Your Life” and “Wannabe.” The costumes were also a key part to the show with the women wearing looks reminiscent of their iconic 90s fashion (leopard print and Union Jacks included, naturally).
Geri Halliwell shared a close up photo of one of her looks to Instagram, showing an embroidered corset with the words “Girl Power” written across the back in gold.
“The Union Jack dress belongs to us all. A family of houses, unified. An evolution of girl power,” she
captioned the photo
.
The Dublin show marks the Spice Girls first performance since they played the 2012 Olympics closing ceremony. The group is scheduled to perform 12 more shows throughout the U.K. Here’s hoping it goes off without a hitch!
Erika Harwood is a New York-based freelance writer covering fashion, beauty, pop culture, and politics.
Advertisement – Continue Reading Below

Are You Sabotaging Your Self-Love?