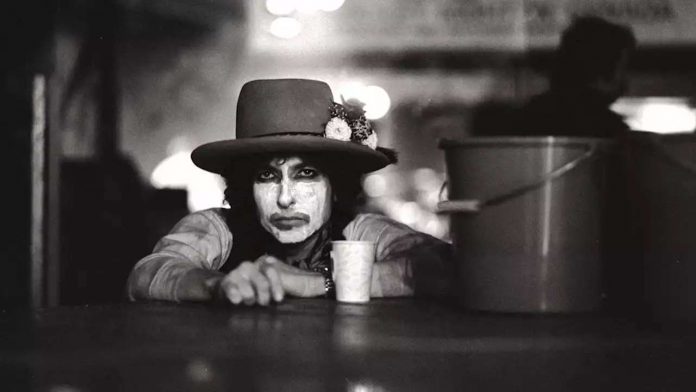 Parsing Rolling Thunder Revue’s more outlandish moments, including an appearance from a faux congressman, an unbelievable story about Kiss, and the truth about Renaldo and Clara.

Joni Mitchell,
Mick Ronson, and many others along for the ride.
But Murphy wasn’t talking as a fan: he was speaking as Rep. Jack Tanner, the character he created with director Robert Altman and cartoonist
Garry Trudeau
for the 1988 HBO miniseries
Tanner ’88,
and the Sundance Channel’s 2004 follow-up,
Tanner on Tanner.
It’s not exactly the most widely remembered show in television history—and what “Tanner” was saying didn’t sound all that implausible, making it easy for a viewer to get duped.
So why include something like this in a so-called documentary at all? Because being obsessed with Bob Dylan means analyzing and scrutinizing and holding each note up to the light to find new interpretations. In this world a raucous sing-along with the chorus “everybody must get stoned!” couldn’t possibly
just
be about getting stoned—but any mention of the word “rain” must mean heroin. A track about the end of a relationship, called “Sara,” couldn’t just be about Dylan’s impending divorce, even if he got divorced from a woman named
Sara.
Swedish Academy
!), everything Dylan does and says has to have some additional meaning.
Dylan brought this on himself. He came on the scene in the early 1960s, claiming to be a hobo riding the rails who sang a song to Woody Guthrie in a New York hospital. He was actually a middle-class kid named Robert Zimmerman—but he
make that hospital visit! His 2004 memoir,
Chronicles: Volume One,
was a best seller, but biographer
Clinton Heylin
parts of it “a work of fiction.” In
Rolling Thunder Revue,
an off-screen interviewer—possibly Scorsese, although it’s tough to tell—asks Dylan to summarize the 1975 tour. “I don’t remember a thing about [it]…I wasn’t even born!” Dylan replies. He wears the elusive nature of truth like a bolo tie.
So here is something of a scorecard for
Rolling Thunder Revue,
an attempt at gauging more precisely what in the film is real, and what’s not. It’s likely an imperfect list, but that’s probably the best we can do; when I asked Netflix for clarification on a few points, this was the response I received: “The film is not a typical documentary—meaning Marty and team cleverly blended fact and fiction to conjure the essence of the tour and the times…We are not specifically discussing all the choices and why, and want to keep the surprise elements of the film for first-time viewers to experience as they are watching.”
Rep. Jack Tanner: 100% FAKE
As mentioned above, Jack Tanner is a character played by Michael Murphy (costar of
Woody Allen’s

How to deal with a kid who’s always bored – Today’s...