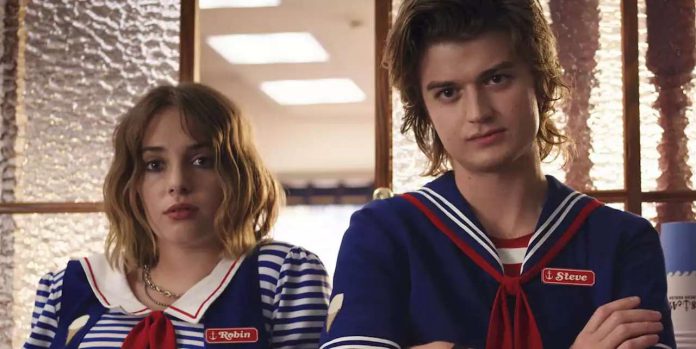 Stranger Things 3.
Stranger Things
MVPs Steve and Robin started off as summer-job enemies. The employees at Starcourt Mall’s ice-cream parlor, Scoops, were erstwhile classmates and quickly fell into an antagonistic relationship: Steve would attempt to pick up girls while Robin kept count of how many declined to take him up on it.
But as soon as the series’ strange things started happening, their rapport warmed up considerably. Robin’s multilingual skills helped translate the Russian message Dustin heard over the radio waves, and she became equally obsessed with whatever mystery was potentially unfolding in their small town. Thanks to Steve and Robin’s collaboration on the dangerous adventure, they became close pals—and at one point, it seemed like they might be more. After escaping the clutches of the Russians, Steve confessed he’d begun to admire Robin and might want their friendship to turn into something romantic. Robin had a surprise for him, though:
She was gay
.
While it seems like a perfectly natural outcome, Maya Hawke, who played Robin, says this was not always going to be their destiny. “Throughout filming, we started to feel like she and Joe shouldn’t get together, and that she’s gay,” Hawke told the
. “Even when I go back and watch earlier episodes, it just seems like the most obvious decision ever.”
If you weren’t expecting that turn of events, don’t feel bad. Hawke
Variety
that she and the show’s creators, the Duffer Brothers, only decided about Robin’s sexuality around the fourth or fifth episode.
“It was kind of a collaborative conversation, and I’m really really happy with the way that it went,” she said. Same!
Estelle Tang
Senior Editor
Estelle Tang is the Senior Editor covering culture and entertainment at ELLE.com—including TV, movies, books, music, and Adidas tracksuits.
Advertisement – Continue Reading Below

Irina Shayk Walked in Her First Runway Show Since Splitting from...

Book Club Cast Had a Reunion in Diane Keaton’s “Home That...