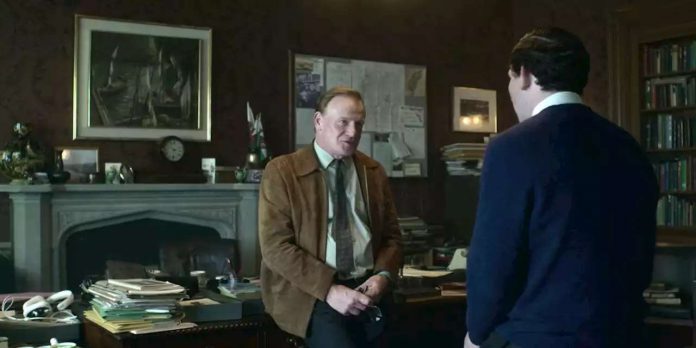 ‘By the end of their eight weeks together Millward and Charles had grown genuinely fond and respectful of each other.’

.
Millward was hesitant to teach Charles.
Millward was taken aback when the school chose him to teach Charles. “By that point I was a well-known nationalist, so I was a little surprised when the university asked me if I would teach Welsh to Prince Charles, for a term, in 1969,” Millward told
The Guardian
. “He had a one-on-one tutorial with me once a week. He was eager, and did a lot of talking. By the end, his accent was quite good.” The article doesn’t go into detail about the intricacies of their relationship, but Lacey writes,”by the end of their eight weeks together Millward and Charles had grown genuinely fond and respectful of each other.”
As
The Crown
depicted, Millward’s friends and wife, Silvia, did not want him teaching the prince, Lacey writes.”People’s opinions were divided, for and against at the time,” Millward said in a 2001 documentary
The Real Prince Charles
.”And one did feel that one was walking a knife’s edge.” Charles revealed in a 2019 ITV documentary that he remembers protests against him taking place while he studied in Wales,
The Telegraph
.
Lacey points out that Millward decided to teach Charles in order to educate him about the Welsh National cause. Lacey quotes Professor John Ellis, who wrote,”Millward believed that direct access to the prince gave Plaid an unprecedented opportunity to influence the thinking of Prince Charles and to turn the ceremony to the party’s advantage.” Millward also hoped to drum up interest in the Welsh language through its association with Prince Charles, according to Lacey.

Prince Charles studying in the language laboratory at Aberystwyth University.
PA Images
Getty Images
Charles admitted he wasn’t talented in the Welsh language, despite his lessons.
“I did my utmost to learn as much as I could,” Charles said in the ITV documentary, according to
The Telegraph
.”But in a term it’s quite difficult, and I’m not as brilliant a linguist as I’d like to be.” However, Lacey writes that”Charles had a Welsh accent to match that of many lifelong Welsh speakers,” at the time of his investiture.
Prince Charles speaks during his investiture at Caernarfon Castle on July 1, 1969.
Bettmann
Getty Images
Millward’s family told Lacey the professor was disappointed Charles didn’t continue his study of the language after the investiture.
Charles’ time with Millward led to a love of Wales that endures today.
Charles has a special relationship with Wales and its people to this day. He recently made time to
ahead of their World Cup matches, and according to
The Telegraph
,
he describes the country as “magical.” Prince Charles and his wife Camilla, the Duchess of Cornwall, even
, which the prince said he wanted to purchase as a way to “indicate as much interest and concern for people in Wales that I possibly could,” the
Telegraph
reports. The two spend a week in the country every year, and the prince visits regularly to attend special events.

Kaley Cuoco is working with Gr

Glossier’s First Eyeliner Pen Is Here To Save Us From Uneven...