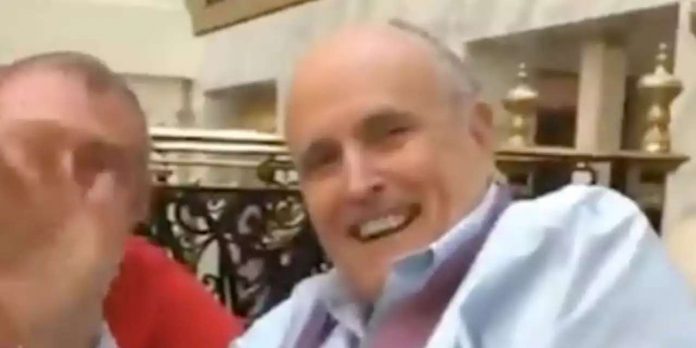 Hours before being arrested, two Soviet-born men broadcast their lunch with Giuliani.

October 10, 2019
You are looking at actual video footage of the ghost of Rudy Giuliani’s legacy sitting next to Lev Parnas and Igor Fruman, who are currently raving in federal custody, and waving at the camera like a deceased spouse in a movie detective’s tragic backstory. Not only have they stopped trying to hide the collusion, they’ve resorted to TikToking it.
I don’t think we’re fully prepared as a society for how deeply stupid the movie version of these events is going to be. Like a KidzBop version of
All the President’s Men
. A quickly cobbled together Lifetime movie with terrible wigs that are still somehow better than the real life wigs. An atrocity.
That said, I would never say no to being hired to write this actual and figurative farce. Here’s a transcript of my most recent pitch meeting with a Hollywood executive:
Okay, so picture it: you’ve got Rudy Giuliani and these two Ukrainian-associated dudes sitting in what looks like a mall food court.
Why?
A profound lack of taste. My best bet is they decided a fun lunch would be walking by the Panda Express multiple times and taking samples of the Orange Chicken until they were full.
Did they wear new disguises every time they got a sample?
I think we both know that they didn’t. Okay, so the Hero of 9/11 is sitting there in an absolutely enormous shirt that has no relationship whatsoever to his physical form. Think Missy Elliott’s inflated black costume from the”Supa Dupa Fly” video but by Brooks Brothers. And he’s got his tie on but not tied. At all. Perhaps was never tied. It’s just a flaccid tie dangling from his neck like a Scarlet Ligature.
I don’t understand.
Please don’t try to. Oh! Here’s something. About a decade ago I went to a formal event and I wore a bow tie slung around my neck, untied. Purposefully. I think I saw it on a Justin Timberlake video. And the entire evening people kept asking me if they wanted them to help me tie my tie and I had to keep replying”No thank you. It’s a look!” And I am now ready to concede that it was not, actually a look.
Why are you telling me this?
It adds color to the story! Anyway, so Rudy is sitting there half-dressed, next to Rosencrantz and Guilderstern, and for some reason they decide that this needs to be documented on video. What’s crucial to this scene is that it’s unclear if they knew, going in, that this was a video and not a photo but what is clear is that they all come to this understanding at different moments. As will be the case when he realizes he’s fallen out of Trump’s favor, Rudy is the last to know.
Don’t you think that these people, whether guilty or not, would want to avoid the appearance of collusion?
Shockingly no! This is a character study, see? Of the dumbest criminals to ever walk the Earth. People so blinded by their power that they don’t even realize how dumb they really are. You may say,”Isn’t it dramatically convenient that hours after they take this pointless video, two out of the three of them are arrested?” And I say,”Must I remind you that this movie will be very, very bad? But not, I remind you, as bad as reality. Also there’s a boat chase and I’ll write a part for The Rock.”
You’re hired.
R Eric Thomas is a Senior Staff Writer at ELLE.com, home of his daily humor column”Eric Reads the News,” which skewers politics, pop culture, celebrity shade, and schadenfreude.
Advertisement – Continue Reading Below

Wrong Distance Relationship Her Boyfriend Just Admitted to WHAT?! in Discover