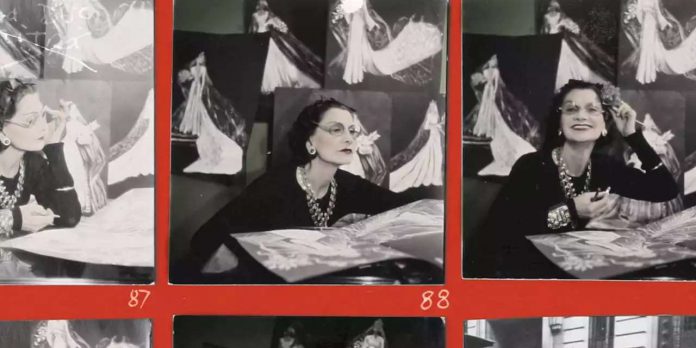 Watch the latest chapter from the short film series ‘Inside Chanel.’

digs deeper into that legacy.
Chanel in Hollywood
Chanel
“It is through cinema that fashion can be imposed today,” the savvy designer said in 1931, and she would wisely use the medium to increase the reach of her brand. That same year, Chanel journeyed to Hollywood as a guest of film magnate Samuel Goldwyn. His request? For Chanel to dress his actresses, among them Gloria Swanson, Marlene Dietrich and Greta Garbo. At that point, Chanel had already had a creative hand in several French films (she was responsible for the uber Parisian beret-trench combo worn by Michelle Morgan in
Port of Shadows
. However, Chanel’s brand of pared down sophistication was deemed too minimalist by Tinseltown establishment, at odds with the prevalent razzle-dazzle aesthetic.
Chanel
Unrelenting in her vision, Chanel simply packed her bags and headed home, though far from empty handed.

Having absorbed a great deal regarding lighting and composition of scenes, Chanel hired filmmaker Robert Bresson to photograph her her fine jewelry designs and would go on to create costumes for the films of such legendary directors as Luchino Visconti and Alain Resnais. It was Resnais’
Last Year in Marienbad
(1961), for which the black chiffon pieces from her Haute Couture collection would help to create some of cinema’s most iconic imagery. Indeed the designer’s approach to life itself was not unlike a film with careful editing, invention and even reinvention, ultimately culminating in its own inspiration for the big screen. Watch the video below.
Advertisement – Continue Reading Below

Gap and Kanye West Will Collaborate for the Next Decade

Prince Harry and Meghan Markle Have Found a New Home

She Invented the Gender Reveal Party She Has Some Regrets