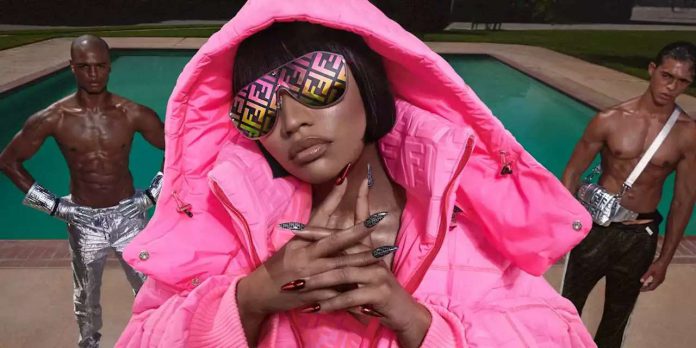 The rapper and the legendary Italian fashion house teamed up for a 127-piece collection debuting in October.

By
Véronique Hyland
Sep 17, 2019
In a black crop top and leggings, padding around her house during a wardrobe fitting, Nicki Minaj is supremely disarming. She extends a hand, clarifies the spelling of your name, and offers everyone water—she presents herself as a very low-key host. You might think, “Did I really just meet
the
Nicki Minaj?”
To see her the next day, as she dramatically poses for Steven Klein’s camera, arching her back on a diving board, is to Get It. We’re on a Warner Bros. lot, in a faux cul-de-sac where plenty of onscreen suburban magic has been made—a prime-time wonderland where the Partridge family’s house abuts the Waltons’ and Major Nelson’s. Within spitting distance is the
Friends
fountain, where the cast gamboled through the opening credits. Beneath Minaj shimmers a swimming pool that has appeared in more films than most working actors. Flanked by male models, she is wearing a pink one-piece bathing suit that curves around her body like a NASCAR track. She is transformed. She is Queen. She is Megatron. She is, to quote the virtuoso verse that imprinted her on the world’s consciousness, a motherfucking monster.
And the clothes she’s wearing—along with those on the coterie of models that surround her—are part of her collection Fendi Prints On, a 127-piece collaboration with the esteemed Italian fashion house that launches in October. The collection includes a women’s, men’s, and children’s line, meaning you could, if you so desired, outfit the whole family in Minaj style.
On Minaj: Dress, earrings, socks, pumps. On model, left: Dress, brassiere set, handbag. Right: Bodysuit, skirt, handbag. All, Fendi Prints On.
Steven Klein
Minaj has a history with the brand, to say the least. Last year, you might remember, she appeared on the cover of ELLE in a shoot by the late Karl Lagerfeld, Fendi’s then creative director, who appeared in some of the photos with her. It was a busy time for Minaj, but she jumped at the chance to make it happen, boarding a flight from Los Angeles to Paris. “He was always someone I wanted to work with, and I was just counting down the moments [until it happened],” she says. “But I didn’t know if it would ever actually happen.” And her impression of Lagerfeld? “He wasn’t as serious as I thought he would be. He was focused, but not mean. And he was so interesting to just watch in his habitat.”
“Cut to” (quoting Minaj, because she has the kind of natural cinematic instinct that queues up the transitions for you) a recording studio “at three, four, five o’clock in the morning.” She started freestyling over a beat that became the basis for her song “Chun-Li.” “I ended up saying, ‘Fendi prints on,’ just freestyling. I didn’t write that lyric down; I was just having fun.” The refrain made its way onto the track. On the cover of the “Chun-Li” single, Minaj wore a Fendi logo fur bomber jacket with a matching vintage Fendi bikini bottom. The seeds of the collaboration were sown. “I can’t believe that when I was doing that little picture that day, with the Fendi jacket and Fendi panties on…” she marvels, “I didn’t think that the actual company would think that that was dope. To know that they liked it that much, and now it’s on a T-shirt, is so iconic to me.”
On Minaj: Jacket, bikini, skirt, earrings, handbag. On model, left: Trousers, gloves, sneakers. Right: Jacket, trousers. Sneakers, Fendi. All remaining, Fendi Prints On.
Steven Klein
Wearing head-to-toe double Fs is kind of a dream come true for Minaj. Growing up steeped in hip-hop culture, she explains, “Certain brands have always been sought after, because we’d hear rappers rap about them all our lives, and we think that these brands signify some sort of success in life. And then, when you’re able to actually a afford them, it feels like, ‘Wow, I’ve accomplished one of my goals, at least in the fashion world.’ Now, looking back, I don’t think brands make me successful, but I do think that there are certain ones out there, like Fendi, that make women feel glamorous.” She’s drawn to the logo because “it’s super confident. It’s like, ‘I don’t give a fuck what you feel about it, this is what I’m rocking.’ Hip-hop embodies that cockiness.”
Minaj knows whereof she speaks: She wore a Fendi Mania logo look to the brand’s spring 2019 show last September, and in March she was invited to make a house call. Fendi’s creative director, Silvia Venturini Fendi, recalls that when Minaj made an incognito stop at the house’s Rome headquarters, “I started receiving phone calls from friends saying, ‘My daughter is outside—where is Nicki?’ Every time somebody sees her, in a second it becomes viral.” But her rabid following was just part of the appeal, Venturini Fendi says. “What we liked about Nicki is that she plays with feminine codes, but from her point of view, which is that of a very strong, independent, successful woman,” she says. “She talks about being strong and getting what you want, and I think that it’s kind of liberating for women.”
What I want [to tell] girls is not necessarily, ‘Go and gain weight and have a big booty,’ but ‘If you do have curves, be proud of it, flaunt it—love the skin you’re in.’
Speaking of getting what you set your mind to: Minaj had very specific ideas when it came to design.

There had to be hot pink, the specific shade that’s become associated with her—and the color of her piled-high hairdo in her viral “pickle juice” video clip. She knew, she says, that “everybody’s going to be like, ‘Where’s the pink, bitch?’ ” She also wanted to make body-conscious pieces that showcase curves. “I want to make clothes that make girls with my body look sexy,” she says. “We’re in a new time, where you don’t have to feel bad if you’re not the tiniest you’ve ever been. Women, we struggle with that so much, because we’ll go back to old pictures of ourselves, and we’ll be like, ‘I used to be so skinny!,’ and we start making ourselves feel bad. What I want [to tell] girls is not necessarily, ‘Go and gain weight and have a big booty,’ but ‘If you do have curves, be proud of it, flaunt it—love the skin you’re in.’ As clichéd as that sounds, I’ve been really trying to teach myself that. ‘This is who I am; take me or leave me, bye!’ ” The collection, she says, is “for everyone who wants to show skin. We all go to the beach, we all get sexy, we all have sex, we all bust it open!”
Minaj also felt strongly about including pieces that would be accessible to her fans. “If I’m going to do Fendi,” she says, “I want to feel like I’m back in Southside Jamaica, Queens, New York, wearing Fendi. I don’t only want to be front row rocking my Fendi; I want to be in the hood rocking my Fendi, too.” Thus the collection includes more approachable pieces like T-shirts and sneakers emblazoned with her face. Her fans, she says, “are going to be really surprised when they see that I did think of things for them. I totally know that there are a lot of people who think that they can’t afford Fendi, and those are going to be some of our new customers, because they’re going to go and get the sneaker, or the hat, or the T-shirt. If you love your fashion, then sometimes you save up for certain things that you really love.” Minaj famously worked as a waitress prior to her current galactic fame. “When I was doing my 9-to-5,” she says, “this is something that I would have saved up for.”
Minaj has already posted some of the looks on Instagram, including a video of herself wearing a hot pink jacket from the line that riffs on her “Chun-Li” cover outfit, netting over 12 million views. “She really wanted it to be something that she could wear,” Venturini Fendi says. “She’s going to wear it in her real life—it’s not just something that bears her name and that’s it.”
The collection is for everyone who wants to show skin. We all go to the beach, we all get sexy, we all have sex, we all bust it open!”
While Lagerfeld, who passed away in February, didn’t live to see the collaboration come to fruition, he championed the project. Minaj recalls a meeting where “we all were super emotional, because we were talking about Karl. I just wish he’d gotten a chance to see this come full circle, because I remember how supportive he was of me on the [ELLE] shoot, and it made me feel really good.” The designer was on her mind throughout this shoot as well. “While I was on set, while I was taking the pictures, I definitely was thinking to myself, ‘Would he be proud of this look? Would he be proud of this pose?’ ” she says.
When we speak, Minaj is working on her upcoming album, which she calls “fierce, fun, and unapologetic.” She adds, “It’s probably the most excited I’ve been about an album release in a really long time. I’m happy that we’re not making my fans wait for another album, like I’ve done in the past.” (Nearly four years passed between
The Pinkprint
and
Queen
.) “This one incorporates all the things people love about Nicki, but it also just has a way bigger sound, so it goes perfectly with the collection.”
On Minaj: Swimsuit, handbag, pumps. On model, left: Bikini, skirt. Pumps, Fendi. Center left: Trousers, handbag. Sneakers, Fendi. Center right: Bikini. Right: Trousers, gloves, waist bag, sneakers. All remaining, Fendi Prints On.
Steven Klein
After this foray into fashion design, would Minaj ever launch her own line? Where most celebrities would give a carefully calibrated, open-ended answer, she is exuberant. “Yes, yes, yes, yes, yes, and yes!” she says, giggling. “Yeses across the board, okay? I’ve been really strategic and picky on purpose, turning some things down and waiting for the right opportunities. Once people see that you have selling power and you are able to impact a brand in such a positive way, then I think it’s only a matter of time. The Fendi collection alone made me feel like I would love to continue doing this—getting to that boss status. That’s where I would like to take fashion, for sure.”
Top look: Minaj and models all wear Fendi Prints On. Hair by Dionte “Arrogant Tae” Gray (Minaj) and Ward at the Wall Group (models); makeup by Mila Thomas at Basic White Shirt Ltd. (Minaj)and Kabuki for Chanel (models); manicures by Sreynin Peng; casting by Ricky Michiels; models: Tricia Akello at Muse NYC, Isaiah Hamilton at Ford Models NY, Devin Truss at DT Model Management, and Remington Williams at DNA Models; produced by Lola Production.
This article originally appeared in the October 2019 issue of
ELLE.

Hold Up How Old Is the Cast of ‘Work It’ Again?

A Guide to the Most Scenic Films Shot in France