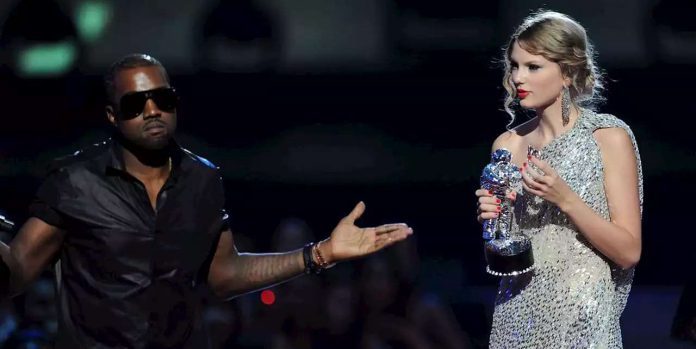 “If you had told me Kanye West would have been the number one focus of my week, the media, and my part in the VMAs I would’ve looked at you crossed eyed,” she wrote.

Kevin Mazur
Getty Images
This year’s VMAs will mark the 10-year anniversary of Taylor Swift winning the Moonman for best female video and Kanye West running up on stage and announcing that Beyoncé should have won instead. With a decade under our belt since the incident, which resulted in an on-and-off feud between Swift and West, some new information has come to light. In the deluxe version of her new album,
Lover
, Swift released some never-before-seen diary entries from her life, including one from the infamous 2009 VMAs.
“Ahh… the things that can change in a week…Let’s just say, if you had told me Kanye West would have been the number one focus of my week, the media, and my part in the VMAs I would’ve looked at you crossed eyed,”
she wrote
. “And if you had told me that one of the biggest stars in music was going to jump up onstage and announce that he thought I shouldn’t have won on live television, I would’ve said ‘That stuff doesn’t really happen in real life.

Well… apparently…. It does.”
That’s not the only new bit of info that’s recently surfaced. In an oral history of that night,
Billboard
spoke to former Vice President of Viacom, Van Toffler, who revealed that both Swift and Beyoncé were in tears.
“I’m almost front of house at that point, and I have to go back to the truck. I see [Big Machine founder] Scott Borchetta and I say, ‘Please have her stay, I will figure out a way to deal with this,’”
he recalled
. “I walk behind the stage, and sure enough there is Beyoncé and her dad, and she is crying. She was like, ‘I didn’t know this was going to happen, I feel so bad for her.’ And that’s when it started to click in my head, and maybe hers, about potentially having the whole arc play out in that one night.”
Swift agreed to stay until the end of the show that night, and Beyoncé gave her the opportunity to give her speech. If only the story had ended there, but as we all know, it was

Taylor Swift’s “You Need to Calm Down” Is the Clapback Anthem...

Kay So About Those Zendaya and Tom Holland Dating Rumors