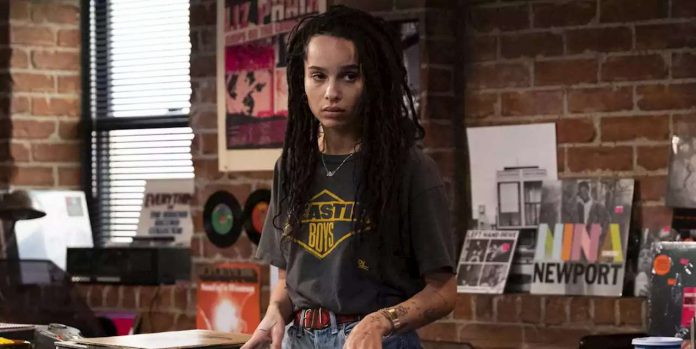 Rob’s recounting her worst breakups—just in time for Valentine’s Day!

of the same name,
High Fidelity
“centers on Rob, a female record store owner in the rapidly gentrified neighborhood of Crown Heights, Brooklyn who revisits past relationships through music and pop culture, while trying to get over her one true love,” per a Hulu press release.
Phillip Caruso
Phillip Caruso
Kravitz also executive produces the series, which follows Rob as she seeks romantic harmony, reliving her most brutal breakups in the process. So far, it doesn’t appear to be a smooth journey. At one point in the trailer she describes running into an ex:”You know that scene at the end of
Braveheart
where they rip all his entrails out and he’s like, ‘Freedom!’ But it’s like a positive thing, you know? Because he inspired his people or whatever? Like that, but without the silver lining.

While her love life may be out of tune, her business boasts”decently curated cuts, [an] unpretentious location,” and an owner who’s”a little rude,” per a two-and-a-half-star Yelp review. She runs it alongside Cherise (Da’Vine Joy Randolph) and Simon (David H. Holmes). Jake Lacy and Kingsley Ben-Adir co-star as two possible love interests.
Hulu’s

Polls Voters Want Medicare for All But Don’t Know What It...

Four Dresses Two Parties and One Adorable French Bulldog Inside a...