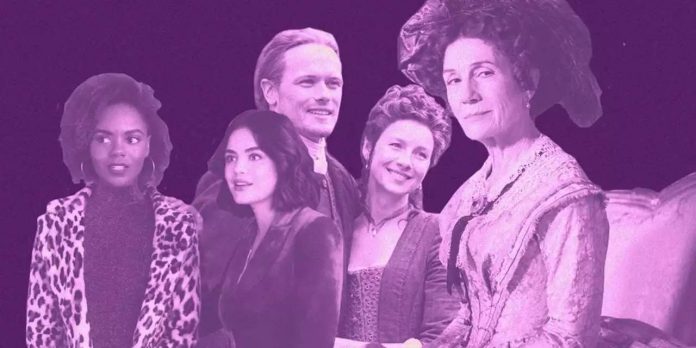 Here are 13 of the shows that should be on your radar in the new year, from returning faves like Outlander and Schitt’s Creek to new offerings from the teams behind Downton Abbey and Big Little Lies.

Season 6 (January 7 on Pop TV)
Pop TV
We are not even close to being emotionally prepared to say goodbye to the Rose family, who will return for one last glorious set of episodes early in the new year. The sleeper hit’s final season will feature the wedding of David and Patrick, aka TV’s most perfect couple, so get ready to feel some feelings and belt some Tina Turner.
2
(January 8 on Freeform)
Freeform/Gilles Mingasson
Yes, it’s yet another remake of a beloved ’90s TV show, but unlike so many others, Freeform’s reimagined
Party of Five
has a compelling and timely reason to exist. Whereas the original show centered on a group of siblings forced to fend for themselves after their parents died in a car accident, this party of five are not orphans, but the children of immigrants who are deported back to Mexico in the season premiere.

3
Season 2 (January 17 on Netflix)
Netflix
One of the freshest and best new shows of 2019 will return for its sophomore run on Netflix in the new year. The next season will see awkward but intuitive teen sex therapist Otis (Asa Butterfield) continue to counsel his fellow students while navigating his own sexual neuroses, while Gillian Anderson will, of course, return as his boundary-less mother Jean.
4
Season 2 (January 24 on Hulu)
Allyson Riggs
When Hulu dropped six half-hour episodes of
Shrill
in March 2019, one thing was clear: three hours with Annie (Aidy Bryant), Fran (Lolly Adefope), and their kooky friends and families were not enough. Eight new episodes are coming in January, with Annie
beyond her comfort zone—starting with an unpaid internship and sex in a field.
—Julie Kosin

Fashion Insiders Love Her But She’s Ready for More