Home Woman At 50 Songwriters Hall of Fame Ceremony Focuses on Creator Recognition With... 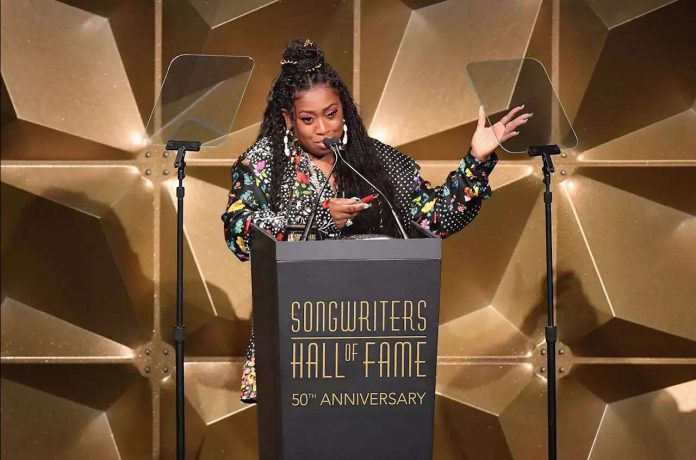 The Songwriters Hall of Fame is partnering with the Grammys to create a traveling exhibition that will explore the craft of songwriting and help gain recognization for the giants of the discipline.

Prince
song and then actually wrote to the iconic artist’s record label to ask if Prince wanted to use one of his songs. They said no, but Austin was encouraged nevertheless because someone “who had worked with Prince had responded,” he told the packed ballroom. “Even if they said no, I just kept sending it out, until someone said yes.”
Back then when Austin was still just trying to make it, he said, “I never knew this day was coming…. If getting a no all of those years ago, inspired me, I wonder what this [induction] will do.”
Next up, Nelson inducted Tempchin but first played one of the songs he wrote made famous by the
Eagles
, “Peaceful Easy Feeling.” Touting Tempchin’s songwriting craft, Nelson observed he “is a master of simplicity.”
Tempchin gave thanks for his induction while remembering his early days. “I became Midnight Jack, hanging out with all the music people, looking for the next song,” he said, recalling “all of the crazy harmonies from staying out all night” as “steps on the path to the SHOF.” he said. Tempchin then performed another Eagles hit “Already Gone.”
Moving right along, Antonoff and Bareilles came out to present
Martin Bandier
with the visionary leadership award, calling him a champion, fighting on behalf of the songwriters and artists.
Bandier, who handed over the chairman/CEO reigns to Sony/ATV Music Publishing — one of three giant music publishing operations he either built or rebuilt during his long storied career — to
Jon Platt
in April, acknowledged that he was proud to stand alongside past award winners like
Hal David
Del Bryant
.
“There is no greater honor than being part of this from the early days — but not at the start” of the organization, which started as a group staging a few showcases and has now developed into an event that is “now a centerpiece of the music industry,” he said. “And it’s all still being done on a shoestring.”
Through the work of this organization and other efforts currently going on in the industry, “one day songwriters will be as easily identified as a book writer,” Bandier said. “Ask anyone who wrote Harry Potter and everyone knows that name. Shouldn’t we all also know who wrote songs like ‘New York, New York’ and ‘Over the Rainbow’?”
Next up, Dave Matthews came out to introduce Cat Stevens with a performance of his 1970 classic “Father and Son” and later said that when he was asked to induct Yusuf into the SHOF, “I didn’t ask for details or hesitate.” Because he was such a fan of the songwriter, he jumped at the opportunity, he said, “The most important inspiration of this artist is has never stopped searching.”
Accepting the induction, Yusuf immediately agreed, noting, “Most of my songs are about the journey.” Following his early success Yusuf became ill with tuberculosis in 1969, “then the real search started,” he added. “The road was long but I never imagined I would be standing here in this elite group of geniuses.”
Eventually Yusuf’s “search went beyond over the rainbow,” which led him to God and Islam, he said. “When I reached out to the ultimate presence, I realized I couldn’t live without divine help.”
Stevens played two songs, “The Wind” and a new song, before the show turned to acknowledge an up-and-coming songwriting master, Halsey, who was presented with the Hal David Starlight Award for new artists. Songwriter
Benny Blanco
, last year’s award recipient, noted that “so many artists say they stand for something but don’t do anything.” But when Halsey stands for something, he added, “she will stand at a mountaintop and shout it at you.”
When Halsey came out, she said, “It’s ironic that I am getting this award for writing and I didn’t write my speech.” Before performing, she continued to say that while today she now presents the best version of herself, there was a time when she was vulnerable and self-critical and overwhelmed.

“I want to thank everyone who made me feel small,” she said, “because that made me want to write the biggest songs.”
Before Bonnie Raitt inducted John Prine, she acknowledged the band that was backing all the performers during the night and then started into Prine’s “Angel from Montgomery.” That song originally appeared on Prine’s 1971 eponymous debut album before Raitt released her own version on her Streetlights album in 1974 and has since become a staple of her catalog. “On behalf of all of us who sing your songs,” she said, “thank you.”
John Prine said his career as a songwriter began because he often couldn’t remember the lyrics to the songs he was playing, so he would make up his own words. “Bang, that began my career,” he said. “There is no better feeling in the world to have a killer song in your pocket and no one else has ever heard it.”
For the next segment, Missy Elliott got a power-packed acknowledgement of her accomplishments from
Queen Latifah
and the former first lady. During the early days of her career, “everyone told Missy she wouldn’t make it,” Obama said in the video. “But Missy knew better.”
In looking at her as a songwriter, the trick is not just understanding what the lyrics are saying, “but where those words come from,” Obama said. Then Lizzo came out and put on a show-stopping performance of “Sock It 2 Me” that gained more wattage with a cameo from Da Brat.
Latifah said she has known Elliott since the ’90s and has “loved watching her grow and get stronger and get greater. She lives and breathes music.” When she releases her album
Supa Dupa Fly
, Latifah said, “it lifted us up and changed the way we looked at hip-hop; it brought hip-hop and R&B together.”
Elliott choked up accepting the award, but not before she brought a smile to everyone’s face by observing, “You know I am old school, I came up here with [my speech] in a notebook.”
Elliott also announced some news, saying she has “new music and four videos coming.”
Even the next segment looked back at Elliott’s accomplishments when
Jason Isbell
— who would sing Tom T. Hall’s “Mama Bake a Pie (Daddy Kill a Chicken)” — said he had decided to “start making folk music, so he wouldn’t have to follow Missy Elliott.”
Country Hall of Fame and Museum’s Peter Cooper inducted Hall (who only appeared by video because he prefers not to travel nowadays), saying he was akin to novelist “Flannery O’Conner with a guitar. Hall wrote sophisticated stories about simple people.”
As the night’s end neared, industry legend
Clive Davis
made the presentation for the Johnny Mercer Award — an award so esteemed that only songwriters already in the SHOF are eligible to receive it — to
Carole Bayer Sager
. Davis reminded the audience that Sager began writing songs in high school when she co-authored The Mindbenders’ “Groovy Kind of Love.” “Her body of work is definitely considered the gold-standard by all of her peers,” Davis said.
Accepting her award, Sager recalled being too nervous to attend her SHOF induction 32 years ago, so she was thankful to have a second chance. She was then joined onstage by Patti LaBelle and others to sing “That’s What Friends Are For.”
Finally, the evening closed with a medley from Justin Timberlake, who was there to accept the contemporary icon award. Timberlake said that growing up in Memphis led him on the path to music. “I grew up with music all around me because I grew up in Memphis where music is in the street and in the churches,” he said. “Church is the best place to get your start. Church is were I discovered that I love to sing…. I soon realized that singing could take me to a place like here.”
Along the line, the former

Twitter Reacts to the Shocking Twist in the ‘Little Fires Everywhere’...

This cleaning hack for your smelly shoes could be life-changing