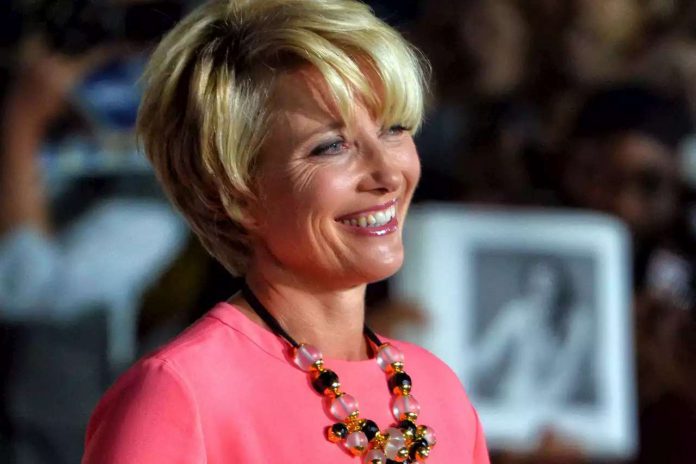 At 60, Academy Award-winning actor and screenwriter Emma Thompson wonders what’s next: ‘How do I feel about dying? Am I ready to look at that?’

By
Gina Shaw
Emma Thompson is thinking about death.
Having just turned 60 in April, the two-time Academy Award-winning actor and screenwriter is used to the typical media questions about “growing old gracefully” in the film and television world. But she’s more interested in talking about bigger questions.
“With this watershed birthday, I will contemplate what I really want to do next,” she says during an interview from her offices in London, where she’s just wrapped up filming for
Last Christmas
— a romantic comedy inspired by the George Michael song — which she co-wrote with performance artist Bryony Kimmings. “Time is precious, and it is not unlimited. One feels immortal, I think, until one is about 40. Then intimations of mortality come. My big conversation with myself, which has already started, but will go on this year is, ‘How do I feel about dying? Am I ready to look at that?’ We are in such denial about it, and it’s very strange because it’s the one thing we know absolutely will happen.”
Thompson’s life recently has been “dotted with loss,” she says. Her beloved sister-in-law, Clare (who lived just down the road from Thompson and her husband, Greg Wise, in London’s West Hampstead neighborhood), died of
in 2017, just a year after the death of Thompson’s close friend and
Love, Actually
co-star Alan Rickman, also from cancer. “My mate Jeremy Hardy, a comedian, died just 2 weeks ago, and my best mate’s husband died last year. It seems like people are dying all the time in my life. My existence feels very hard-won and precious at the moment. I’m addicted to doing and action and activity, but this year I’m going to look at how it feels to be less addicted to that and more able to sit.”
Emma Thompson? Sit?
Probably not for very long, she acknowledges: “That’s the point of this patch of time. Sixty isn’t 50. Sixty is well into ‘How many more years have I got when I can be active and useful and produce good and worthwhile work?’ Maybe 10 or 15? Going longer, I think maybe you should let everyone else have a go.” She pauses. “But if I’m lucky enough to reach that age and no one’s able to shut me up, you can remind me of this interview.”
Continued
A Lifetime of Roles
It’s hard to imagine the peripatetic Thompson “just sitting.

Since rising to fame with her role as Princess Catherine of Valois opposite her then-husband Kenneth Branagh in
Henry V
in 1989, Thompson has appeared in at least one major movie virtually every year — sometimes several. In 1993, for example, she starred as Beatrice in
Much Ado About Nothing
In the Name of the Father
, and as Miss Kenton opposite Anthony Hopkins in Merchant Ivory’s
The Remains of the Day
. Thompson’s also a screenwriter: She wrote and starred in both
Nanny McPhee
movies and won an Academy Award for screenwriting for 1995’s
Sense and Sensibility
, in which she played Elinor Dashwood. This summer, she reprises her role as Agent O in
Men in Black: International
; and her new film with Mindy Kaling,
Late Night
, which earned praise at the Sundance Film Festival in February, debuts as an Amazon Original Movie.
Thompson’s “good and worthwhile work” has defied genre and categorization. For every restrained, enigmatic, emotions-bubbling-under-the-surface character like Miss Kenton or judge Fiona Maye in 2017’s
The Children Act
, there’s a kooky Sybill Trelawney, the divination teacher in
Harry Potter and the Prisoner of Azkaban
, or a passionate, fiery Beatrice in
Much Ado About Nothing
. She loves comedy — she began her career in standup with the Cambridge Footlights, alongside Stephen Fry and Hugh Laurie. And in 2003, she took on the complex dual roles of nurse practitioner Emily and the fantastical Angel in HBO’s
Angels in America
.
“I’ve enjoyed the really out-there characters more than anything,” she says. “I played a 77-year-old serial killer in
The Legend of Barney Thomson
. That was something special. And maybe the most remarkable experience I’ve had in the last 10 years was playing Mrs. Lovett on Broadway in the concert version of
Sweeney Todd
. I suppose I’m probably not very good at repeating stuff. I think I would be bored if I had to do things again and again. It’s like going on a different walk, and the landscape is different, so you’re unlikely not to notice what’s going on. And it’s vital that you know what’s going on when you’re creating.”
Continued

Morphe’s Pride makeup collection is giving us all the feels