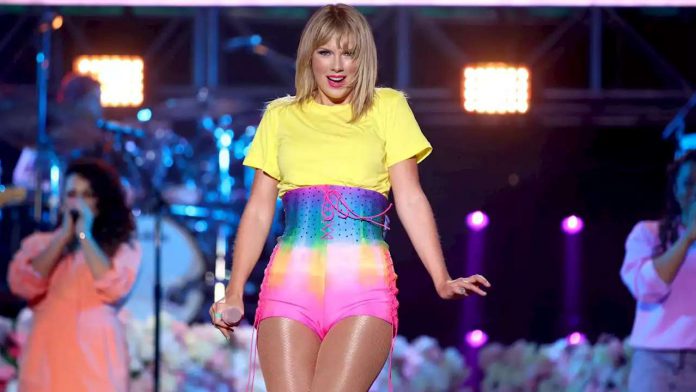 transformation
into a Marie Antoinette impersonator as she wages war against everyone with internet access. (And by Marie Antoinette impersonator, I mean rich person with Pinterest access and a worrisome grasp on modern social movements.)
In the newly released single, Swift has some choice words for anonymous Twitter users, critics, and anti-gay activists. Throughout the song, she bundles them into a monolithic group, which is strange, considering the large number of gay critics who’ve previously discussed her work.
The initial verse is certainly an indictment of the way that wealth has insulated her from the world and how it works.
Say it in the street, that’s a knock-out.
But you say it in a tweet, that’s a cop-out.
And I’m just like, “Hey, are you okay?”
Is this not the same Taylor Swift that refuses to comment to the press or travel without an entourage of security? Strange, because she sets up a scenario where she believes an average Twitter user could realistically carry on an engaging dialogue with a pop star. Instead, she opts for the tone of
that
girl from your school. The one who drove a BMW and would threaten nerds with their lawyer dad. She then continues:
You need to calm down, you’re being too loud
And I’m just like oh-oh, oh-oh, oh-oh, oh-oh, oh-oh (Oh)
You need to just stop, like can you just not step on my gown?
You need to calm down
Again, her main issue with the opinions of “the masses” appears to be our interference with her ability to enjoy wealth and privilege? And the repeated use of “Are you okay?” and “You need to calm down” is such a brutish tactic to shut down others’ opinions. Especially when those opinions come from already marginalized voices where the same sentiment is leveled against them by conservative pundits, racists, and incels.

Why are you mad when you could be GLAAD?
(You could be GLAAD)
Sunshine on the street at the parade
But you would rather be in the dark ages
Makin’ that sign must’ve taken all night
Am I the only bad-faith critic who read the subtext of “anti-gay protestors are secretly gay” through her deployment of “dark ages” and “night”? Closets, which many still think bigots live inside, are also “dark” in the literal sense.
You just need to take several seats and then try to restore the peace
And control your urges to scream about all the people you hate
‘Cause shade never made anybody less gay
The most unhinged this song becomes is likening “shade” to what is happening when neo-Nazis crash Pride parades. It’s fitting, however, that we can officially gage pop culture’s co-opting of “shade” into a catch-all term for “saying something contrary” through the lyrics of a Taylor Swift song.
And we see you over there on the internet
Comparing all the girls who are killing it
But we figured you out
We all know now we all got crowns
You need to calm down
In the closing moments of the song, she once again bundles critics and sexists into a single pile. And through this, I’d like to posit a theory on the anonymity of this “you” that appears throughout the song. It’s certainly nefarious, but helpful too! “You” allows Taylor Swift an easy escape: If critics are no different than neo-Nazis staging a “straight pride,” it saves her from specificity. Maybe there’s still hope for change before “Can You Please Calm Down” becomes her “Let Them Eat Cake!”: misappropriated, but still indicative of the reason she didn’t survive the class war.
Share This Story

If You Need To Escape For A Moment Today Listen To...

Can you get pregnant on your period?