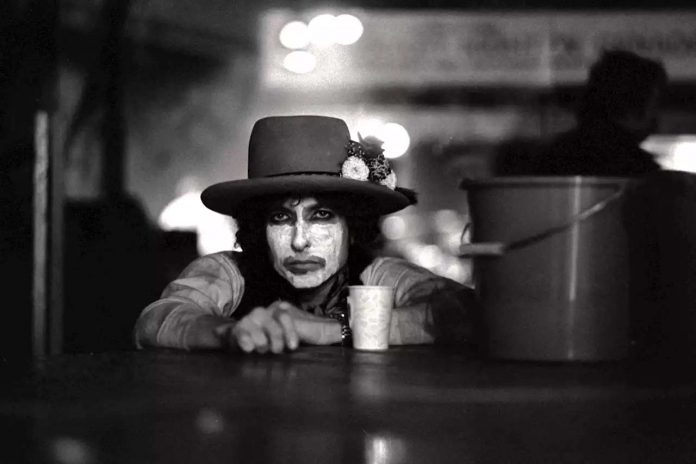 The Rolling Thunder Revue is still unlike any tour ever conducted by a major rock star. It began when Dylan, months after the release of his 1975 masterpiece
Blood on the Tracks,
wanted to stage the antithesis of the big money stadium tour he’d conducted with the Band the previous year. Feeling restless and a bit nostalgic, he invited longtime friends and associates like Joan Baez, Roger McGuinn, Allen Ginsberg and Ramblin’ Jack Elliott on a tour of theaters on the East Coast and into Canada. Ticket prices were kept low and shows weren’t announced until a couple of days before they happened.
Dylan’s name didn’t even appear on the tickets; he was merely one of the many acts that performed throughout the course of these often three-hour long shows. But he sang with a fiery passion that was absent on the 1974 tour and delivered some of the most stunning performances of his career. Each night he mixed classics like “The Lonesome Death of Hattie Carroll” and “A Hard Rain’s a-Gonna Fall” with a handful of
Blood on the Tracks
tunes and and selection from his yet-to-be-released LP
Desire.
Dylan recruited Mick Ronson from David Bowie’s Spiders From Mars to play guitar; violinist Scarlet Rivera was literally invited into the studio after he saw her walk down the street with her instrument. Together with bassist Rob Stoner, drummer Howie Wyethm guitarist/pianist T-Bone Burnett, guitarist Steve Stoles and steel guitarist David Mansfield, they created an explosive sound every night.
“The idea was to put a tour up, a combination of different acts on the same stage for a variety of musical styles,” Dylan says in the new documentary. “I wouldn’t say it was a traditional revue, but it was a traditional form of a revue …” He then pauses and looks disgusted with his own choice of words. “That’s all all clumsy bullshit!” he declares.
Throughout the entire 1975 leg of the tour, Dylan was shooting the movie
Renaldo and Clara
with filmmakers Howard Alk and David Meyers. The film — which mixes concert footage with improvised scenes featuring every member of the large touring troupe — wouldn’t premiere until 1978 and was dismissed by nearly all critics as a pretentious, impenetrable mess. The original cut of the movie was four hours, which represented just a small fraction of the footage shot throughout the course of the tour.
When it came time to think of another Dylan documentary after the amazing success of
No Direction Home,
his team quickly realized that the raw footage from the period could form the basis of an incredible film. There was just one problem: “The negative was lost,” says a source close to the Dylan Camp. “Which [was] really horrifying. Part of the problem with corporations the days is all the consolidation. And in the consolidation of our storage system, somehow the numbering system fell off. There was just no way to find the negative — and we looked. Man, did we look. Now everything is in Iron Mountain. We went there and just couldn’t find it. It’s really sad. My worst fear is it’ll turn up tomorrow. For all we know, its sitting in some collector’s basement.”
Luckily, they did had have a 16mm work print of the whole thing in their archives. “The term ‘work print’ is very self-explanatory,” says the source. “It’s the print you make to work on when editing the movie, to cut the footage into different pieces and hang them up with tape.

But it had all been worked on and was really scratchy. We thought it looked really cool and very 1970s, but Marty [Scorsese] in his wisdom said, ‘We have to make this stuff look great so it looks present.’” His team went through each frame of the film and restored it as much as was physically possible. “It certainly doesn’t look like it was shot today since it has that grain and texture of 16 millimeter,” says the source. “But it looks
beautiful.
“
Nobody in Dylan’s team even knew exactly what was on the work print. When they went through it, they were thrilled to discover amazing scenes like Dylan and Joni Mitchell playing her song “Coyote” at Gordon Lightfoot’s apartment; the entire Rolling Thunder Revue rehearsing for the tour in a hotel ballroom while baffled old women compete in a Mahjong tournament; Dylan watching Patti Smith deliver a spoken-word poem at an East Village club and thrilling performances of songs like “Hurricane,” “One More Cup of Coffee” and “Knockin’ On Heaven’s Door.”
Dylan’s team began interviewing key figures from the tour like Joan Baez, Roger McGuinn, T-Bone Burnett and Scarlet Rivera about 10 years ago, though Scorsese used the conversations with them very sparingly; in the case of Burnett and Rivera, he didn’t utilize
any
of the new interview footage. “He had all this Scarlett stuff from the time and that fit with the film better than Scarlet today,” says the source. “T-Bone was fantastic, but it just didn’t fit the narrative. He’s cool with that and he gets it.”
The man himself was interviewed just about two years ago, right around the time that Scorsese finally had time to devote his attention to the doc. “He’s got to do his feature work first and he’s had some very challenging and unbelievable [films] during that time,” says the source. “It’s not like there’s been continuous work on it all these years.” (Like
No Direction Home,
Scorsese was given the footage by Dylan’s team and was allowed to craft whatever kind of movie he wanted.)
Deceased figures like Jacques Levy and Mick Ronson are seen briefly in archival footage, but the film never pauses to address their roles in the broader picture. “Nowadays you have this thing called Google, so anyone that is interested can look at the end credits or go on Wikipedia and figure out who everyone is,” says the source. “That isn’t Marty’s thing. He wants to recontextualize this so it is something that will live beyond the moment, which I think it does.”
Past Dylan projects have been released through PBS and HBO —
Rolling Thunder Revue
is the first one done in conjunction with Netflix. “With the death of the DVD market and the retail store, Netflix is able to deliver it to people’s homes all over the world,” says the source. “There’s a village in India that celebrates Bob every year. It’s called Shillong. People there will be able to see this movie and without Netflix they might not have been able to.”
While wary of revealing too many secrets embedded within the movie, Dylan’s people hope the documentary will reward repeat viewings. “We hope that people will watch it several times to unlock its various Easter eggs,” says the source. “Documentary footage can be used in any way that you want to tell a story and it’s our hope that people will figure out what delights them about this film.”

Wine is the key to a long life

Robin Wright On House Of Cards’ Finale Being “Trumped By Trump”...