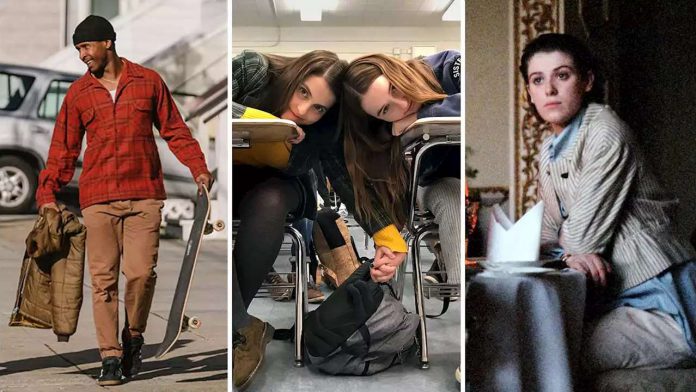 ‘Booksmart’
Annapurna Pictures
Olivia Wilde delivers a fantastic directorial debut with this hilarious, blazingly paced teen comedy. The story of overachieving high school besties (played by Beanie Feldstein and Kaitlyn Dever) who embark on an epic night of bad behavior before graduation, the film is as raucous as
Superbad
— but with characters who are even more full of surprises
. — John DeFore
‘The Last Black Man in San Francisco’
Peter Prato/A24
Joe Talbot’s artful, quietly funny debut joins the ranks of great San Francisco films with its original story of two black outcasts (Jimmie Fails and Jonathan Majors) navigating the city they grew up in, which has changed so dramatically. The movie powerfully ponders the question of whether you can find home again once you’ve lost it.
— Todd McCarthy
‘Long Day’s Journey Into Night’
BFI London Film Festival
In this mesmerizing cinematic feat by young Chinese auteur Bi Gan, dreams, memory and an unsolved murder are all part of a forlorn film noir. If the first half captivates with its elusive narrative of doomed lovers, the second part, shot in one continuous 50-minute take, is an immersive, jaw-dropping plunge into melancholy and movie magic.
— J.M.
‘Non-Fiction’
Courtesy of Ad Vitam Distribution
Olivier Assayas’ witty, resonant, richly insightful comedy set in a Parisian publishing world gripped by change is further evidence of his gift for tackling grave subjects with the most ticklish of touches. Guillaume Canet stars as a conflicted editor, but a brilliant Juliette Binoche all but walks off with the film as his frustrated actress wife.
— Jon Frosch
‘Rolling Thunder Review: A Bob Dylan Story by Martin Scorsese’
Courtesy of Netflix
Martin Scorsese has made masterful music docs over the years, but none as playful or inventive as this film about Bob Dylan’s wacky 1975 tour.

Gogglebox stars reveal how you can get onto the show