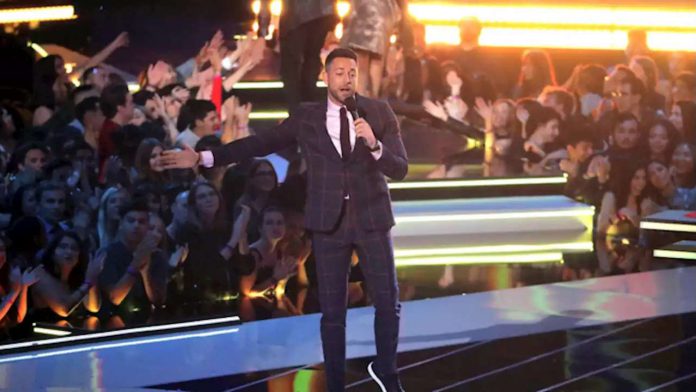 As Hollywood gathered at the Barker Hangar in Santa Monica, Calif., on Saturday night for the MTV Movie & TV Awards to celebrate the night’s honorees — including Trailblazer Award winner Jada P…

Dwayne “The Rock” Johnson
— calls for empowerment and inclusion within the entertainment industry and beyond took center stage.
“When I first got to Hollywood, [they] didn’t know what the hell to do with me: half black, half Samoan,” Johnson said. “I was told at that time, ‘You gotta be a certain way. You gotta drop some weight, you gotta be something different, you gotta stop working out, stop doing the things you love, stop calling yourself ‘The Rock!’”
“So I made a choice. I wasn’t gonna conform to Hollywood; Hollywood was gonna conform to me,” he continued. “This is what I am. I’m proudly half black [and] half Samoan and wanted to bring those cultures out here for the world to see. There’s another side to being your most authentic, most true self, and that’s the side where the magic is on. That’s gold. You gotta recognize the joy and the responsibility of bringing everybody with you. And when you do that, by being kind, being compassionate, inclusive, and straight up just being good to people, that’s what matters, that’s where the real power is.”
Related
Why It’s Hard for Films like ‘Hala’ to get Made in Hollywood
The star of the upcoming “Hobbs and Shaw” wrapped up his speech with one succinct quote: “It’s nice to be important, but it’s more important to be nice.”
Putting meaning to your message was a running theme throughout the awards. When “To All the Boys I’ve Loved Before” stars
Lana Condor
and
Noah Centineo
accepted the award for best kiss, Condor made sure to preach the importance of accepting all genders and sexual orientations: “Kiss who you want to kiss, love who you want to love, be who you want to be!”
Star of “The Kitchen,”
Tiffany Haddish
Jada Pinkett Smith
with the Trailblazer Award, celebrating the actress’ philanthropic work and “Red Table Talk” Facebook Watch series, in which she speaks to a variety of people in the industry about important subjects.
Haddish — who has appeared on an episode — said, “[Pinkett Smith] never stops pushing boundaries. She doesn’t know the meaning of the word no,” before joking, “Which is also why I ask her for money.”
”I love Jada Pinkett Smith with her open communication with children about issues these days with her new show,” “The Haunting of Hill House” star
Kate Siegel
told
Variety
on the red carpet. “I think that’s so important to remove the kind of pedestal nature from celebrities so that we can all talk about the same issues that are affecting all of us.

Pinkett Smith accepted the award alongside her son
Jaden Smith
, who also hyped up his mom and the crowd before she began speaking, saying she wasn’t sure if she deserved the award quite yet.
“[But] because I was comparing myself to all the trailblazers that I admire I realized, ‘Okay maybe we do have something in common,’” she explained. “Often we applaud the trails people blaze and we forget to applaud the trails that are blazed in the hidden grooves of the mind that are filled with uncertainty, thoughts, beliefs and pain. And its these determinant obstacles must be challenged in order to muster the courage to blaze their own path.”
She went on, “Every last person in this room must do that in some capacity so that means that every single person in this room is trailblazing.”
The show, of course, had lighter moments. Host “Shazam!” star
Zachary Levi
kicked off the night by featuring “nerdy” high school photos of celebs to remind the audience where all the “fancy and beautiful” stars really began. From the Rock’s meme-able fanny-pack picture and
Kumail Nanjiani
’s awkward yearbook photo, to Levi’s own theater shot from his high school production of “Bye Bye Birdie,” the comedian’s goodhearted teasing got the audience laughing early. “At the end of the day, everyone in this room are nerdy entertainers,” Levi told the crowd.
And for some guests, the night served as a full-circle moment. While “Schitt’s Creek” star
Daniel Levy
went to his first MTV Awards show as a host for MTV (he helmed “The Hills” after-show for MTV Canada),
Kiernan Shipka
said it was “insane and amazing” to be sharing the stage with her former “Mad Men” co-star Moss, who she began working with when she was six years old.
“The Chilling Adventures of Sabrina” star also talked about how her eponymous character embodies the values celebrated at the awards show. “Just the fact that she’s such a radical little feminist at such a young age,” Shipka told
Variety
. “And instead of just talking the talk, she actually walks the walk and wants to make changes and is active about them. I think we can all hope for change, but taking action is the most important thing.”
Other highlights throughout the night included a performance from
Lizzo
who sang her hit song “Juice” and
Bazzi
who hit the stage with “Paradise.” See below for a full list of this year’s winners:

9 Celebrities Who Missed Their Prom

Indulging the Irrepressible Urge to Touch My Pussy to the Floor...

Mariah Carey Derek Jeter Was a Catalyst’ in My Divorce From...