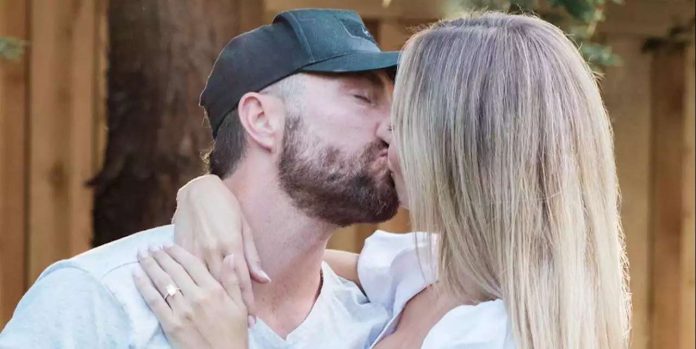 And this hiccup involved dog poop.

alum Lauren Bushnell just got engaged to Chris Lane, a country singer.
Chris and Lauren spilled all about the proposal to
People
—but there was a mini hiccup involving dog poop.
Attn. Bachelor Nation, another
Bachelor
alumna is officially off the market! Lauren Bushnell, who is best known for appearing on season 20 of the show (and winning Ben Higgins heart before they broke up in 2017), just got engaged to country star Chris Lane at her family’s house in Oregon. And he proposed by singing her a song, awwwwww.
“Even though I felt pretty confident I was going to get the ‘Yes,’ I’ve never been
that
People
. “When I got to the third verse of the song and knew it was time, I pretty much blacked out. The next thing I knew, she said ‘yes’ and the nerves just lifted! It’s an explosion of excitement, pure joy, and love.”
Pure joy, love, excitement… and a little dog poop, if he’s being honest.
“As I was about to propose… I stepped in fresh dog poop with my bare feet,” Chris admitted.

“Not at all how I planned it out in my head!”
Chris put a lot of thought into the whole thing, and ended up settling on a backyard proposal after thinking hard about what would make Lauren the happiest. Here’s how his thought process went:
“I knew she wouldn’t want some elaborate crazy proposal,” Chris said. “So, I decided to keep it pretty casual. I asked her parents for different places in Portland I could potentially take her to, but after a lot of thought I decided doing it at the family cookout would be the most laid-back setting and that she’d appreciate the simplicity of me proposing to her in her parents’ backyard.”
“I was initially worried that doing it on Father’s Day might not be the best move, but her dad, Dave, said that it could only add to his Father’s Day and that’s when I decided Sunday, June 16 was the day,” he added. “Shout out to Lauren’s parents, Dave and Kris, for having the yard in tip-top shape!”
For her part, Lauren was just as psyched.

Are Olivia Jade Her Boyfriend Just Pretending To Date?