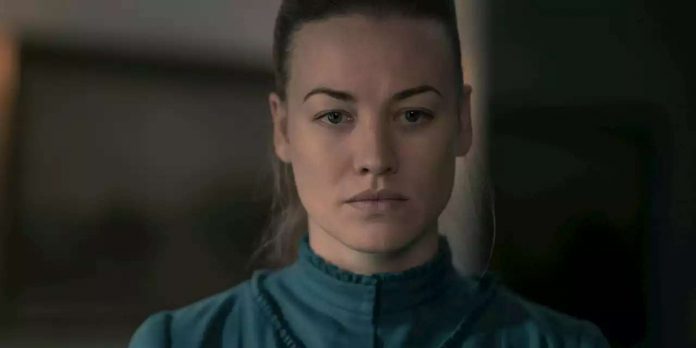 Despite her recent team-up with June, Serena Joy is no freedom fighter. Don’t trust her.

season three, episodes five,”Unknown Caller,” ahead
.]
This season of
The Handmaid’s Tale
would have you forget the past two years of its own show. In a new, more hopeful Gilead post-Nicole’s Canadian escape, Serena Joy (Yvonne Jaqueline Strzechowski) seems to have seen the light, striking up a dangerous understanding, dare we say friendship, with June (Elizabeth Moss). In fact, June has effectively seized this new dynamic with both hands, doing what she can to propel Serena Joy to more power, perhaps in the hopes that she will circumvent the male dominated status quo and bolster a resistance. But whatever control June thinks she has over her former mistress, she shouldn’t trust Serena Joy, and neither should you.
In the latest two episodes that just dropped on the streaming service, we see a grieving Serena coming to terms with the loss of her perceived daughter. I say perceived, because we cannot forget that June is Nicole’s mother, and
T
HT
cannot gaslight me into giving such title to the woman complicit in the rape of multiple handmaids and, in some ways, the entire American people. One act of selflessness does not negate the damage she’s done.
Let’s review, shall we? We all know the emotional, physical, and sexual abuse June faced at the hands of Mrs. Waterford during her time as Offred. But what about pre-Gilead? Before she stripped herself of all power in a government partly of her own making and, of course, her marriage?
Serena Joy Waterford wrote a book titled
A Woman’s Place
which we as viewers don’t get to read, but can assume contains some serious religious right-wing bullshit reducing an entire gender into the role of second hand citizens—a role, I might add, she has had serious trouble adjusting to in the aftermath. There is one famous line from the diatribe that we do know:”don’t ever confuse a woman’s meekness for weakness.” It’s true, Serena is hardly weak, she’s willing to have other women raped to get the child she’s always dreamed of, will go up against the government she helped form to try to regain some of the rights she willingly gave away, and, ultimately, makes the ultimate sacrifice, allowing her”daughter” to lead a better life in Canada away from her.

Sophie Giraud
Last week, June encouraged Commander Waterford (Joseph Fiennes) to give his wife more power behind the scenes, advice he takes to heart. This week, Serena, who seems to take more and more baby steps towards the side of good, uses his newfound lenience to take a solo trip to Canada. In a meeting arranged by June—who is forced to sit through an agonizing, monitored call with her husband—she travels to meet Luke in the Toronto airport in the hopes that seeing Nicole one last time will give her closure. Upon arrival, Serena shirks her blue gown in favor of skinny jeans and lets her hair freely hang past her shoulders. There’s a sense of the woman she could someday be, who all the women of Gilead could be again if Serena joins the cause.
If
THT
were a worse show, I’d believe the trauma of giving up her kin could release the linchpin that tethers Serena Joy to her allegiance with the Sons of Jacob, and excite in her long-awaited growth. I might even stan #Jerena on Twitter. But
The Handmaid
‘s Tale
has proven itself much more nuanced than that. She made no attempts to include June on her quest for visit. She feels little empathy for a handmaid viciously beaten right in front of her at the hands of Aunt Lydia. Once a traitor to her gender, always a traitor.
“You need to understand that I’ve protected your wife,” she all but explicitly threatens when Luke tries to refuse her gift for Nicole. No, Serena Joy hasn’t changed at all.
Related Story
Emily Tannenbaum
Entertainment Editor
Emily is the entertainment editor at Cosmopolitan, which is a nice way of saying she watches way too much TV and constantly wants to tell you about it.
Advertisement – Continue Reading Below

Everything We Know About ‘The Little Mermaid’ Remake