Home Woman Is this why everyone on Love Island is constantly wrapped in a... 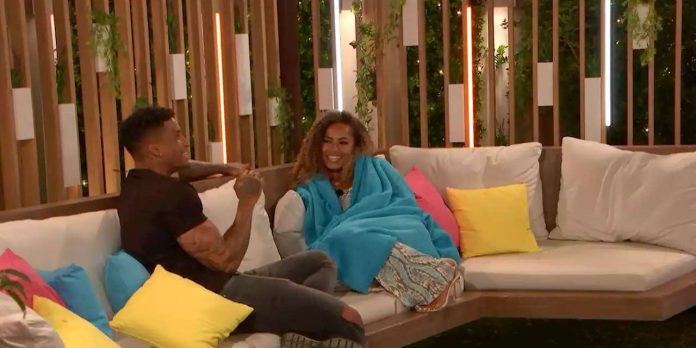 as religiously as the rest of the UK, then you’ll have probably spotted something a little peculiar.
Despite the fact that
the villa is in Majorca
, the Islanders seem to constantly be wrapped in blankets.
The gang can regularly been seen doing fine burrito impressions when they’re sat about in the evening, and yeah, we do know that even Spain gets a little chilly when the sun goes down, but surely it’s not quite as Baltic as these blankets would have us believe.
Right now, Majorca is reaching temperatures of around 29c during the day. But in the evening, that can go down to around 20c. Nothing a little shawl or jacket wouldn’t help, right? So why not throw on another layer as opposed to curling up in a fleecy throw?
ITV
Wes Nelson, producers don’t like it when the Islanders wear too many clothes
, and actually tell them to strip off if they think they’re too covered up during the day, so maybe that happens in the evening too?
“Yeah, it’s no coincidence [that we’re always topless or girls are in bikinis],” Wes told Roman Kemp on
Capital Breakfast
.

“Like, I used to try and go out in a hoodie and heavily clothed in the morning because sometimes it is a bit chilly but yeah, you’d have to take that off.”
When host Roman asked whether the producers would shout, ‘Stop! Top off!’, Wes recalled: “Yeah, because obviously we’d like to be in the shade a bit of the day because it is roasting hot, so when you’re in the shade it is actually quite cold.
ITV
“So me and Josh used to run out all the time in little hoodies and they’d be like, ‘Wes take that off! Take that off! Take it off.’”
Those poor loves are gonna catch their deaths out there!

‘Gentefied’ Has Been Renewed For Season 2