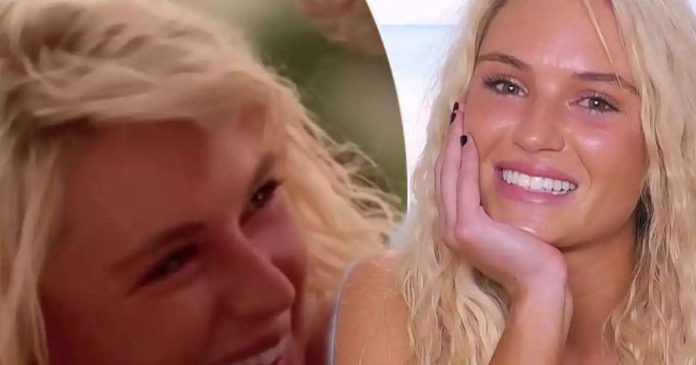 Love Island viewers were left in hysterics after Lucie laughed during a chat with Joe.

Lucie Donlan was left devastated when her love interest Joe Garratt was dumped from the villa, along with Elma Pazar.
However, earlier in the episode during happier times, she left viewers in hysterics when she laughed and giggled with Joe.
The moment left viewers comparing the surfer to numerous animals, including a dolphin, a horse and even, a unicorn.
One person wrote: “Lucie being a surfer makes perfect sense when her laugh sounds like a dolphin #loveisland #lucie.”
Another said: “Was that lucie trying to make a unicorn noise there or was that a laugh.”
Others commented: “I’m sorry did anyone else just hear Lucie’s laugh?! What. The. F**k. Was. That.” and: “Sooo…because Joe called Lucie a unicorn, she now had to laugh like one horse #LoveIsland.

On Tuesday night’s episode, Joe Garratt and Elma Pazar were dumped in a shock double elimination on day 16.
Catering company owner Joe was coupled up with Lucie, while lash technician Elma was partnered with Anton Danyluk.
But in an epic twist, their fellow islanders were asked to vote for the least compatible couples.

Viewers then had the chance to vote one contestant from each pair off the island.
Caroline Flack made a dramatic return to the villa to announce that viewers had dumped Joe and Elma.
Love Island continues nightly at 9pm on ITV2.

How being sad depressed and anxious online became trendy

I Told My Boyfriend How Many People I’d Slept with and...