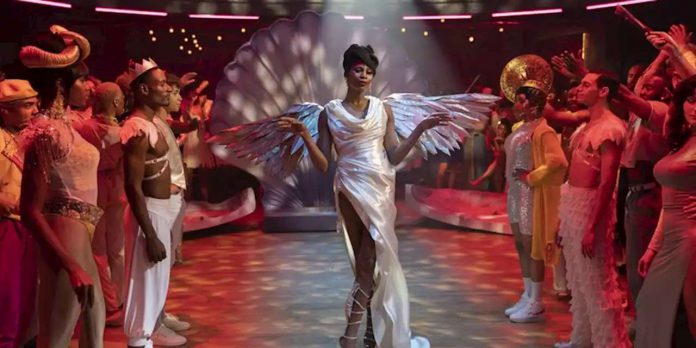 Enter Patti Lupone—and a new house that spells trouble for the Evangelistas.

Spreading love “in the form of some sickening looks” is supposed to be the theme of “Worth It,” the second episode of
Pose
season 2, but when everyone else is acting out selfishly, it seems the only one who understands the true definition of love is Blanca.
Elektra and her exponentially-expanding collection of furs are not welcome in the House of Evangelista anymore. But at least we now know where all her cash is coming from: her new job as a dominatrix in a BDSM sex dungeon. Something tells us “Mistress Elektra” likes lording this newfound power over her clients, even if they do break her no-drugs rule by sniffing a canister of poppers after she whips them into submission. “I never feel bad for a man,” Elektra declares.
Uptown, a casual conversation between Blanca and Angel reminds us of the harsh realities Blanca faces for not being able to pass as cisgender in the same ways Angel can. Last week, Blanca quit her job at the nail salon with the goal of opening up her own salon called Vogue Nails, but Angel reminds her: “Ain’t no way you getting anybody to give you a storefront if they clock you. You know that.” Angel tells her mother she appreciates her privileges, but no one should have to sacrifice fashion for safety, and makes a plan to revamp Blanca’s “shit style” into haute couture. (It should be mentioned that we are robbed of a makeover montage after this exchange.)
Enter: Patti LuPone. We’ve been waiting to see what role the Broadway icon would take on ever since it was announced that she had snagged a part in season 2. Unsurprisingly, she nails Ms. Frederica Norman, a racist, homophobic (and, we discover, transphobic as well) landlady, who acquired a cluster of real estate properties all over the city after catching her husband with another man and filing for divorce. Blanca is almost always the main character tasked with expository scenes that explain the realities of the times to the audience, but this time, that responsibility is handed to Ms. Norman, who gives a quick and dirty lesson on the dangers of gentrification.
“I see the future: gentrification. Do you know what that means?” she asks Blanca, before offering her very succinct definition of the term: “By the year 2000, there won’t be a neighborhood in this city where a normal person feels uncomfortable walking. When you make a neighborhood safe and desirable, good people move in and make it too expensive for the troublemakers, so they move out. Property values go up. Everybody wins.”
After a quick up-and-down—a nervous moment for Blanca, who fears she’s been clocked as trans—and a handshake from Ms. Norman, the storefront is Blanca’s. For now, anyway.
Pinterest
Copyright 2019, FX Networks. All Rights Reserved.
Back at the House of Evangelista, Ricky returns from touring as a backup dancer for Al B. Sure and Blanca quickly catches him and Damon in bed, giving one of the most nonchalant responses a mother could give after catching her kid in the act. She asks them to join her in the living room for a family emergency, they plead for her to wait, and without skipping a beat Blanca drops a truth bomb: another funeral is on the horizon.
Pray Tell and Judy are the first to arrive at the service, critiquing everyone’s fashion choices, of course. (Is there a handbook about the art of throwing shade at funerals? Because there should be.) Blanca, Angel, and Lil Papi join, but Damon and Ricky are nowhere to be found. Instead, the boys went to the Palladium “for Sunday tea,” where they were voguing the night away in front of a mostly white audience. That’s not cool with Blanca, who just last week expounded the perceived merits of Madonna’s “Vogue” bringing visibility to their community.

Now, she seems to have done a 180 on this stance when she tells the kids, “Ballroom is not a trend, nor is it about some flashy dance moves. Ballroom is about family.”
Speaking of families, it seems that Elektra is not meshing well with her former children, Candy and Lulu, in their House of Ferocity. She’s had enough of their Slim Fast dinners, and with her “new signature move” (she’s not as good at table flipping and tablecloth pulling as she think she is), Elektra is out once again. This time, however, she’s got a plan to build a fierce house of her own. Meet the House of Wintour.
After a not particularly fabulous interpretation of
Romeo and Juliet
, starring Lil Papi and Angel, and a
Cinderella
performance from the House of Ferocity, the House of Wintour—Tess (played by Trace Lysette, returning after her small cameo last season), Silhouette, Shadow, Jazmine—interrupts the runway to halt the fairy tale category at the ball. This leads to a brawl between Elektra and Candy, which security has to break up. “Quake in fear, children. Wintour is coming,” Elektra shouts. Sure, it’s an anachronistic pun, but this ballroom super team did not come to play. They did, however, come to steal a couple boys from the House of Evangelista and shake up the rest of the scene.
Much to Pray Tell’s chagrin, there are not only one, but two fights that go down at this ball. One of Ricky’s tour mates tells Damon he slept with his man, which causes a rift in their relationship. The moment gets darker after Damon reveals he’s been having unprotected sex with Ricky because he thought they were monogamous.
After a tip-off from her son, an initially incredulous Ms. Norman realizes that Blanca is trans, and sends her son to take back the rent money and close the storefront. Ms. Norman openly admits she has no problem doing business with thieves and murderers, but can’t work with “a liar.” Those are fighting words for Blanca, who has secured a pro-bono anti-discrimination lawyer from the New York City Commission of Human Rights after Ms. Norman told her not to sign a contract. “I’m not here to gentrify neighborhoods so white ladies like you can feel comfortable walking down the street,” she snaps.
And finally, Blanca gets real with her family, too. She can no longer hide her AIDS diagnosis from her kids. She’s been avoiding taking her AZT, an antiretroviral medication that treats HIV/AIDS, but after attending the funeral, Judy convinces her that dealing with side effects would be better than the alternative. In a touching scene, she explains how she believes she contracted HIV/AIDS, and tells her kids to watch their health. “Love should also be safe,” she explains. Blanca may lose the trophy at the Eros Ball to the House of Wintour, but she wins the award for most dedicated mother in this community in Pray Tell’s eyes.
Pinterest
Copyright 2019, FX Networks. All Rights Reserved.
The episode ends with a quote from the late Hector Xtravaganza, the Grandfather of the House of Xtravaganza who acted as a consultant on season 1 of
Pose
before he passed away last year: “Blood does not family make. Those are relatives. Family are those with whom you share your good, bad, and ugly, and still one another in the end. Those are the ones you select.” It looks like the members of the various houses could stand to take this quote to heart, and appreciate their families while they still have them around. Because the plague still looms, funerals keep adding up, and their culture is at risk of being watered down by the masses.
Related:

The best Selling Sunset memes to come out of season 3