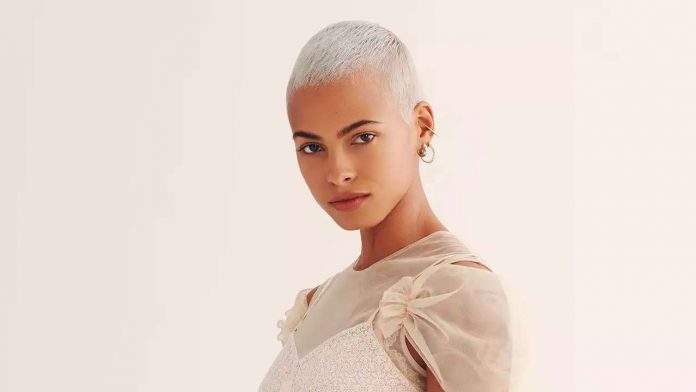 She talks about the chance encounters that led her from her first love.

Pinterest
Simone Rocha dress. All jewelry, Eberhardt’s own. Makeup colors: Stylo Sourcils Waterproof eyebrow pencil in Brun Profond and Le Rouge Crayon de Couleur Mat in Rosy Wood by Chanel.
The most stunning people in this country right now are those who use their strength and grit to create, to challenge, to say no, to embrace yes. For our July issue, we spoke to journalists, athletes, actors, and political activists about the beauty of seizing, and boldly acting on, our power. You can check out all the interviews in our America the Beautiful series
right here
.
A chance encounter with a famous photographer landed Eberhardt (whose first name, short for Dakota, honors her indigenous heritage) an Abercrombie & Fitch campaign at 15; she was one of the company’s first models of color. But modeling was not her passion — that she found a few years later as a pre-med student at Howard University. “Medicine was my first love,” she says, her eyes gleaming the way they do when you talk about a first love that is a human being. “I thought I could make drugs that could change the world.” The eventual focus of Eberhardt’s studies: how alcohol consumption affects the heart.

And then, well, she needed a break. After graduating from Howard, she turned down a full ride to medical school, headed to Los Angeles, and from there traveled the world. There were more chance encounters, this time with movie producers. She was offered some parts, but she wasn’t prepared to change course completely.
We asked 13 of America’s most radiant humans what American Beauty meant to them.
Arrow
Until, one day, she was. So maybe you’ve seen her in this summer’s blockbuster
Dark Phoenix
? She’s also starring in a forthcoming mystery-survival Netflix series,
The I-Land
. “I found a larger platform to encourage, enlighten, and empower,” says the now actor. “Just because I was good at synthesizing drugs did not mean that I was supposed to be a scientist. Just because you like someone doesn’t mean that relationship is for you.” And now for a beautiful pill metaphor: “I get to decide how I am going to be digested, if I’m going to be diluted, and how I am going to be delivered. To do that in 2019 as a woman, and a woman of color at that, is power.” And just the medicine we needed.
A version of this article originally appeared in the

New Balance Makes Its Move on Maximalist Shoes With the Fresh...

Denise Nickerson Violet in Willy Wonka and the Chocolate Factory ’...