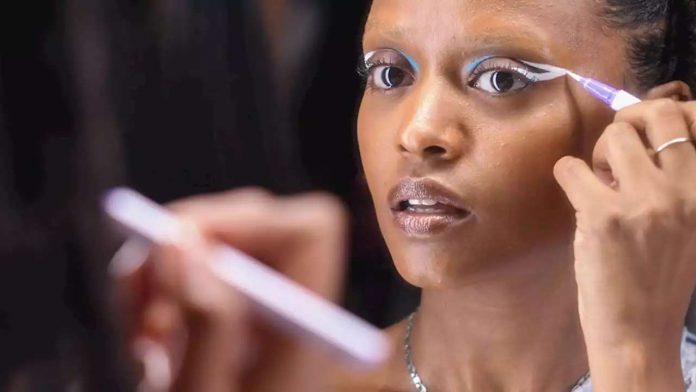 “It feels really good to get dressed up, and makeup is indeed part of how I express myself. I love a liner. I love graphic shapes,” the singer says.

, looked even more dramatic because she had her locs pulled up high on top of her head, letting the eye makeup take center stage.
UZ’s Eye Opening Liner
Photo: BFA
Pinterest
Much like UZ seeks to “unframe the beauty,” or think outside the box, Kelela is known for making music that isn’t easy to categorize. She also stands out because of her eclectic personal style, which she says can veer from “chic, clean lines” to “’round the way” from one day to the next. Growing up as the daughter of African immigrants in the suburbs of Maryland, with a diverse group of friends, helped Kelela make peace with not fitting neatly into any one space. “My experience of never feeling quite here nor there—that was a very uncomfortable thing in the beginning, but I’ve made a comfortable home in this uncomfortable place,” she says.
Although the singer’s beauty routine includes a lot of simple, natural products, like castor oil, tea tree oil shampoo and
Petty Butter
(her favorite body moisturizer), she enjoys experimenting with daring makeup. “It feels really good to get dressed up, and makeup is indeed part of how I express myself. I love a liner. I love graphic shapes. Also, as a brown-skinned woman, having opaque eye makeup that actually works on dark skin and [reads as] the true color is a fairly new thing. It’s an exciting time in makeup in the sense that everything that was once only meant for white girls is now including us,” she says.

Mr. Nakahara flew in from Japan to demonstrate brush-making for UZ’s event.
Photo: BFA
Pinterest
The highly pigmented shades of Eye Opening Liner and the multicultural staff that was hired to work the crowd at the launch event reflects UZ’s desire to be inclusive. “Beauty is not something that should be exclusive or limited to only certain people; it’s for everybody,” says Imamura. And he’s not just talking about the colors. Similar to the way Kelela combines musical genres that don’t usually go together, like the “ambient R&B mix” she’s launching next month, UZ wants to pair two things that are often hard to find in one product: luxurious design with an affordable price. The company is working with a group of Japan-based artisans—the only seven of their kind in the world—to make all of the eyeliner brushes by hand. While prestige brands might charge three-figures for a product with that level of craftsmanship, UZ’s Eye Opening Liner is reasonably priced at $16. “Big brands have trained consumers to think that good equals expensive, but that’s just for marketing reasons,” says Imamura. “We want to change that.” The first ‘frame’ he seeks to break is price—and more boundaries are sure to be shattered along the way.