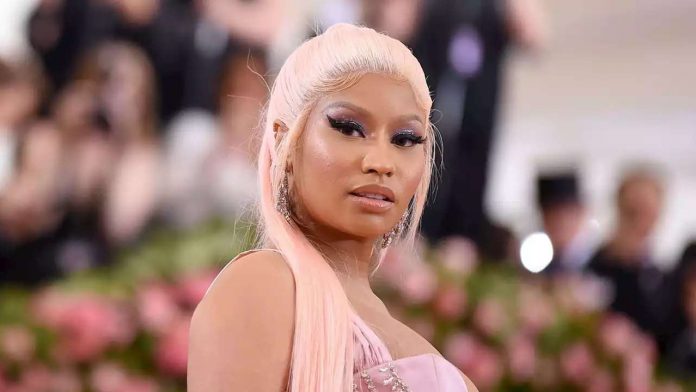 She also flexed her knowledge of the menu

Jimmy Fallon
ditched NBC Studios and went on a dinner date to a place the late-night host has never been before: Red Lobster. Prior to becoming the rap superstar we know her as today, Minaj worked at several of the seafood chain’s locations — that is, before she got fired from every last one of them.
“I have worked at a couple of Red Lobsters and I’ve gotten fired from all three or four of them,” the rapper hilariously revealed as they headed to the restaurant in a pink Hummer limo. And after arriving at the Times Square location and introducing Fallon to Lobsteritas and Cheddar Bay Biscuits, she explained why exactly she was let go. Turns out, when customers took her pen and failed to tip, she followed them out to their car, banged on their windows, and yes, flipped them off with both hands.”I walked to the car, I banged on the car window, and I said, ‘Give me my pen!'” she recalled.”My manager fired me on the spot.”

But just because her career as a server didn’t quite pan out doesn’t mean she didn’t learn a lot on the job. In fact, Minaj has extensive knowledge of the seafood restaurant’s menu, proving that Jimmy chose just the right person to join him for his first Red Lobster experience. Plus, she gave him some helpful tips on how to dunk his shrimp in tartar sauce and crack a lobster, which, admittedly, she’s not too skilled at herself.

Wow, I can’t believe you got fired,” Jimmy joked.
Fortunately, Fallon came through with a chance at what he called”Red Lobster Redemption,” and after they were finished feasting, they threw on uniforms and got to serve actual customers. Based on the footage, we have to say that Minaj was truly thriving, but Jimmy on the other hand, well… not so much. After he was caught drinking a customer’s rum and coke and eating another patron’s biscuits, we can say with confidence that, despite Nicki’s rocky past as a Red Lobster employee, she is clearly the superior server.
But no matter how good of a server Nicki may be, we can pretty much all agree that her rap career is where she truly shines. Following their dinner date, the rapper was tasked with freestyling a verse using the words”hexagon,””yeti,” and”Edible Arrangement,” and well, she crushed it.

Feeling like you need some more Nicki verses? Well, don’t worry! The rapper confirmed that there’s an album on the way, and even though she didn’t reveal a release date quite yet, the knowledge that it’s coming is good enough for us.

47 Designers on Their NYFW Collection Inspiration