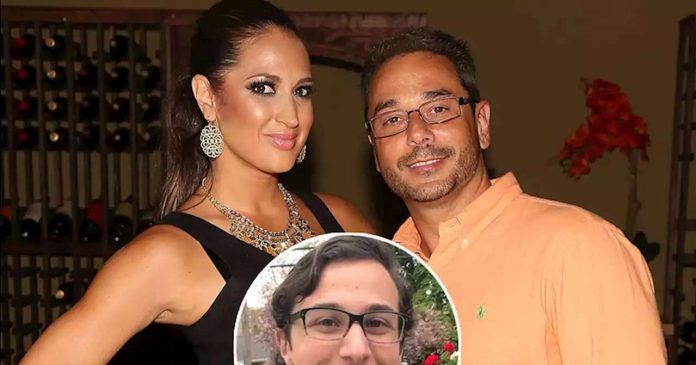 Getty/Facebook
Biggest ‘Housewives’ Blowouts
“He’s clearly trying to use Amber’s celebrity stature to literally sucker people into paying so this spoiled rich kid can attend an egregiously overpriced no-name school,” Jim claims.
UPDATED: 6:33 a.m. on 6/27/19
Jim and Amber Marchese have spoken out about their son’s allegations.
Late Wednesday afternoon, Jim denied he was refusing Michael James Marchese’s college tuition based on his sexual orientation, saying he simply doesn’t want to spend that kind of money on a “no-name college.” Jim also feels James is being “selfish” with his college choice, given that he has “four other siblings who also need financial help.”
“This has nothing to do with sexuality,” Jim told
Champion Daily
. “It has to do with money. He wants to go to a no name college in Connecticut that costs $275,000 when he doesn’t even have a career path that he’s focused on versus going to a state school that would cost $40,000. Who pays that much for Fairfield college? If he had gotten into Yale, Harvard, MIT, U Penn, Wharton Business School — any of the top 20 schools — we would have a conversation. The idea that he wants to spend $275,000 without regard to the fact that he’s got four other siblings who also need financial help is absurd and selfish.”
Regarding James’ claim that his father began to mentally abuse him after finding out he was gay, which “led to me being removed from his home,” Jim said, “We never kicked him out. James chose to live with his mother because she lets him do whatever he wants.”
According to James, his mother is unable to co-sign his student loans, but Jim claims “she does have a job and a salary — as does her current husband — but they refuse to put in any Money and want it all to fall on Amber and I.”
“His complete go fund me page is a fraud,” Jim said. “I just paid for him to complete Christian brothers Academy, an elite private school, and for him to complete pre high school at an elite private school at a total expense of $200,000+. His mother did not pay any of it.”
“He’s clearly trying to use Amber’s celebrity stature to literally sucker people into paying so this spoiled rich kid can attend an egregiously overpriced no name school,” he added. “He’s under court order currently to meet with me three times a week for dinner and to go to therapy because he has been deemed to be ‘troubled’ and he’s refused to attend court ordered therapy or the dinners for nearly the last year.”
Regarding the “gay related material” Amber allegedly found on James’ brother’s phone, Jim said, “The way we found out that Michael was even gay was that his younger brother Sebastian, who is age 14, received this rancid nasty gay porn on his phone and computer while we were watching a family movie with his younger siblings. The reason it was sent to Sebastian was that some of my older sons senior friends at Christian brothers academy wanted to gang bang Sebastian.

They even sent him a video on the discord — new Snapchat for kids — called three gentlemen slam jamming where two guys were raping a third. They specifically said ‘his a–hole is mine.’ They were preying on him.”
Jim concluded his lengthy defense by saying, “In the end this has nothing to do with sexual orientation. It has to do with money which again his mother, grandparents, etc will put no money into. No one believes this is a good investment which is why no one is co-signing. The go fund me page again is a scam. Even if he gets the first year where is he coming up with the rest of the money? He’d have to do a go fund me every year. Also one other thing — it’s a Jesuit school so think about that. He just wants to go there because his friends are. And that’s that.”
View Story
Amber also released a statement, saying she was “really upset” that her stepson “chose to make this public.”
“We tried to keep it out of the public for a reason so Michael can heal from past traumas (that have NOTHING to do with being gay and/or a member of the LGBTQ community) that have happened to him,” she said. “I have said since day one since we found out that we love him, we adore him, and we want the best for him.”
“What he’s doing is called extortion,” she continued, “as he is using my public platform coupled with him being gay in order to try to get us to pay for something. Also, it would be wise to not forget that Jim and I have put all four of our kids through private school which is an expensive investment (almost a half million spent already) coupled with the fact that I am a two time breast cancer survivor. I have paid out of pocket hundreds of thousands of dollars in order to ensure that I am cancer free and stay healthy for ALL four of my children.”
Echoing her husband’s sentiments, Amber added, “His college choice simply isn’t a wise purchase. Michael can go to any other college that is more economical that would make financial sense for our family, but he cannot browbeat us into paying for something that we just cannot afford. Also, one other thing I think it’s important to mention, is that Jim and I both made it very clear to him that if he is gay, we would still welcome him with open arms into our family and would not love him any differently and certainly we would never kick him out of our home because of it.”
“It’s sad to me that he would choose to use his sexual orientation in an effort to make Jim and I look bad, when the crux of the issue has nothing to do with sexual orientation whatsoever,” she concluded. “It’s sad, but his lack of respect, love, or empathy for his entire family is apparent and this saddens me deeply.”
ORIGINAL STORY: 1:22 p.m. on 6/26/19
Over the years,

How My Father Survived a Communist Labor Camp Forged a New...

What We Can Learn From quot Mrs America quot And Why...