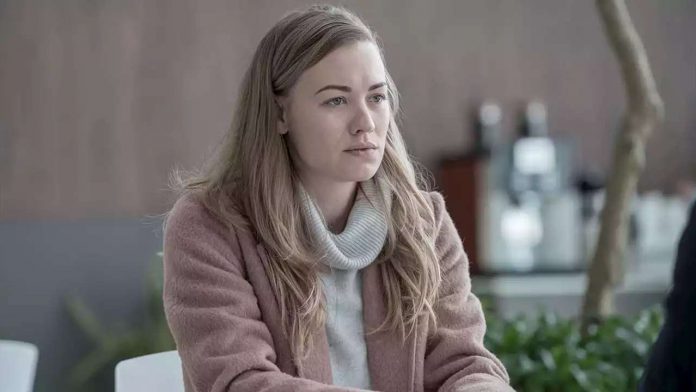 The erstwhile Serena Joy speaks with The Hollywood Reporter about her character’s dark turn: ‘I’m going to lose everyone at this point.’

Courtesy of Hulu
The erstwhile Serena Joy speaks with The Hollywood Reporter about her character’s dark turn: “I’m going to lose everyone at this point.”
[This story contains spoilers through season three, episode five of Hulu’s
The Handmaid’s Tale
, “Unknown Caller.”]
In the season two finale, Yvonne Strahovski’s Serena Joy made a shocking and unlikely choice: parting ways with baby Nicole, allowing June (Elisabeth Moss) to take the child away from Gilead and toward a new, better life outside of the dystopian nation.
If the heavy toll on Serena was immediately clear, it became impossible to ignore after the season three premiere, in which she burned the Waterford house down to the ground in a moment of despair. Five episodes into season three, and Serena’s broken heart remains as shattered as ever — even more so now that she’s reunited with Nicole, albeit briefly.
The reunion occurs in season three’s “Unknown Caller,” with Serena traveling to Canada to meet with June’s husband, Luke, played by O-T Fagbenle. As Nicole’s current caretaker, Luke is fiercely protective of Nicole when he and the baby meet Serena, a choice he makes only because the request came directly from June — an emotional reunion of its own, albeit one that only took place over the phone. For Serena, she hoped it would be enough to lay eyes on the baby she views as her own child; as it turns out, it only emboldened her to want to pursue a full-scale reunion with Nicole, the dangers of Gilead be damned.
At the episode’s conclusion, Serena joins Fred (Joseph Fiennes) in a public pitch to Canada to return Nicole to her “rightful” parents, launching season three into deadly new territory, and marking a gutting point of departure in the admittedly fragile alliance between Serena and June. Ahead, Strahovski joins
The Hollywood Reporter
to talk about Serena’s arc through the Emmy-winning drama’s third season, how her own journey as a mother impacted her work this year, and what’s in store for the series now that Serena has made this heartbreaking choice.
How would you describe Serena’s journey through season three?
It’s different this year, in that she’s in a very heavy space. She’s given up the baby. Her world is just consumed with it, and all the emotions she’s feeling because of it: regret, sadness, desperation. I think she’s probably mostly given up on her relationship with Fred. She basically feels like she has nothing and no one in her court. I think she’s really battling with the decision she made to give the baby away. It’s a real battle between the mind and the heart. She does understand why she ended up giving the baby away; she learned a very hard lesson last year, of what it truly means to be a mother. For her, it meant removing her child from Gilead, that awful environment, which meant making her own ultimate sacrifice. She’s battling that decision now. Her heart is bleeding over it, and second-guessing it at the same time.
How about your own journey through the season, bringing this side of Serena to life? What was different for you about filming season three?
It was a very different season for me, and a very different way of working for me. I have a son now, and I went back to work with a six-week-old baby and started shooting. It was a very different process for me, running back and forth every hour to breast feed my son between takes and scenes. I was just going from the joy of seeing my baby and being with my husband at work, then running back in and carrying on with these awfully depressing scenes. (
Laughs
.) It was a bit crazy!
How did that impact what you were processing as Serena?
I can relate more in a lot of ways to the swirling emotions that Serena might be feeling, but at the same time, I was on such a hormonal high from having a baby.

Not all new moms experience this, but for me, I was definitely experiencing it: “Everything is great, I’ve slept for one hour and I don’t care! I love my baby!” It was all very happy for me at the time, so it was interesting. I was inspired, but I had the happy hormones around, so it wasn’t
really
helpful with Serena’s stuff. (
Laughs
.) But we got around it. We figured it out.
In episode five, Serena travels to Canada and sees Nicole for the first time since giving her away. It’s a very big scene, and I believe your first scene of the series with O-T?
Technically, it’s the second scene. I did see him in Canada in season two’s ninth episode. But it was our first proper scene. I was really excited about it. For me, when I separate myself from the show, and as a fan of the show with all these storylines I never get to see in person and only get to watch, it’s so exciting for me when worlds collide. This was one of those moments for Serena in civilian clothes, meeting Luke, and all of this tension. I think it’s going to go down as my favorite scene I shot this season. It was quite a pure moment for Serena. I know she does have some color in there where she threatens Luke. She is her usual, manipulative self for a few moments in there. But otherwise, it’s such a pure moment for her, that we don’t really get to see because everything came crashing down for her when she saw the baby. It was all about the baby.
What do you think Serena is thinking of Luke in the immediate aftermath of the brief reunion with Nicole?
On some level, there’s a sense of relief that this is June’s husband, because she knows the baby is in good hands, in the same way how in Gilead, only June can understand what she’s going through. She is the only person who can relate to what’s going on with Serena, because they share the same love and the same care for this child. Luke is an extension of that. There’s some relief. But I think Serena raises a really incredible point in this scene: the notion of biology. She tells Luke, “You’re not her biological father.” They are having this argument over who owns baby Nicole. Luke isn’t that person, but neither is Serena. It raises the whole question of who, outside of Gilead, gets to rightfully have Nicole? We all know that June is the mother and should have Nicole herself, but it’s very complicated. It’s such a mess of a situation. But from Serena’s viewpoint, she stands in that ground: “You’re not the biological father.”
By the end of the episode, Serena decides she wants Nicole back. She joins Fred and brings June onto the stage for the public plea to Canada, which is heartbreaking to see.
It’s awful. We’ve seen June planting some seeds in Serena’s mind about how she can become a part of the resistance, throughout episodes one through five. It’s a huge backfire moment, because she’s using her power and the power that June has inspired her to see she still has, to just let her heart win and decide that she just wants Nicole back. It’s such a selfish move. Deep down, I do think she does understand why she gave the baby away, logically. She understands it all. But she can’t stop thinking about Nicole. That scene at the airport informs so much of her decision. It’s so overwhelming for her. It’s just kind of awful. I feel like when the audience sees it, anyone left out there who was still sympathizing with Serena for a second? (
Laughs
.) I’m going to lose
everyone
This interview has been edited and condensed for clarity.
Follow

Priyanka Chopra on Being Married to Nick Jonas and Her Friend...