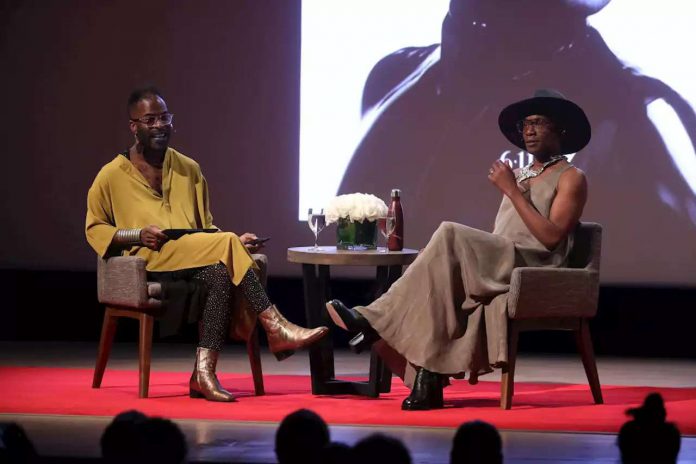 ‘It is a cultural moment that has the possibility to transform and change the conversation. That’s intentional. I knew it was possible. I didn’t think that it was still so necessary.’

“It is a cultural moment that has the possibility to transform and change the conversation. That’s intentional. I knew it was possible. I didn’t think that it was still so necessary.”Author:Evan Ross KatzPublish date:Jun 25, 2019Updated onJun 24, 2019″It’s a leather jockstrap,” Billy Porter tells me on Sunday, revealing what’s underneath the silk Poème Bohémien dress he paired with a thick Rick Owens boot just minutes earlier on stage at the Grace Rainey Rogers Auditorium stage at the Metropolitan Museum of Art. “I’m on my way to Folsom Street Fair, darling,” he says, referring to the annual BDSM/leather-themed fair he’s heading to next, perfectly exemplifying the breadth of spaces Porter occupies all in a day’s work/play.
With limited time, I watch Porter transform before my eyes, never losing an ounce of the wholeness that he is, instead just revealing a new layer. If you didn’t catch the latest part of Porter’s self, that’s on you — after all, it was there all along, even if out of plain sight. “I mean, when you’re born ‘camp’….” he told the crowd that evening, shrugging his shoulder to rapturous claps and snaps from the crowd. He didn’t have to finish the sentence, as the images of Porter at the Oscars in a Christian Siriano tuxedo jacket over a full-skirted strapless velvet gown and Porter at the Met Gala in a bejeweled catsuit courtesy of The Blonds surely swept through many folks’ imaginations.
That these references are so easy to cull to mind is a testament to Porter’s permeation of the oft-hard-to-puncture Hollywood elite bubble after decades of success in the theater, including a 2013 Tony Award for Best Actor in a Musical with “Kinky Boots.” For many years, Porter says, “nobody gave a fuck about my life,” so this opportunity to share his story before an audience comprised of Met patrons and a huge swath of black and brown LGBTQ+ folks, who afterwards stormed the stage for selfies, is thrilling. It’s also an opportunity to meditate on why the simple act of wearing a dress when you’re a person that looks like Porter is, in fact, a political act.
“Nobody has stopped talking about it since February 24. It’s the end of June! Y’all still talking about that?” he asks with curious delight. “I’m not of the social media culture, so this is new. The first time I went — what’s it called, viral? — it was that. I never knew what that meant. Look, the whole point is: It is a cultural moment that has the possibility to transform and change the conversation. That’s intentional. I knew it was possible. I didn’t think that it was still so necessary.”
Earlier, he had spoke on this very topic on stage, saying: “The complicated news it that it’s 2019 and we’re still talking shit about a man wearing a dress. Like, who cares? But the good news is, I’m a household name. And it took me twenty fuckin’ years. Had I known! [laughs] But it wouldn’t have worked then. Everything is all about timing; the world wasn’’t ready for it then, I get all of that.”
Though the world might be ready and the stage significantly bigger, the “Pose” star hasn’t changed much, and neither have his fashions — a fixture in his life starting in his youth.

Porter grew up in Pittsburgh, Pennsylvania, hundreds of miles from the runways of New York, but minutes from the weekly sartorial extravaganza that was Sunday Church. “Black Church was like going to a fashion show every week,” he told the crowd. “When I was younger, there still was a generation of sewers, so it wasn’t about spending your money on the clothes. It was about spending your money on the Vogue pattern that your grandmama cut out, and all of a sudden, you’re in a Chanel suit that grandmama made.”
The idea that he would ascend to fashion icon status is no coincidence. In fact, it’s the whole point, according to Porter. “I’ve always been into fashion, it’s not anything new — we have the receipts from the ’80s and ’90s. I was always doing this, and I’ve always loved it. I’m just excited that I get to do it on this elevated stage and wearing the kinds of clothes that I could never afford before.” Those clothes include Prabal Gurung in the most recent issue of Gay Times Magazine, Schiaparelli for The Cut and Yohji Yamamoto for Esquire.
In many ways, interviewing Porter after the sermon he just delivered on stage in conversation with madison moore, author of “Fabulous: The Rise of the Beautiful Eccentric,” is challenging in that I — along with, if I’m gauging the response correctly, most in the room — feel incredibly nourished from the fruits of his words. To want more feels gluttonous. But Porter’s ascent, and the mere act of him wearing a dress as a gender fluid human being on this planet, has forced a conversation to happen — one that, like the jockstrap hidden beneath his dress, is layered — and thus an entry point to get one last nugget of wisdom.
“Let’s stop comparing and contrasting, because that does nobody any good,” Porter tells me when I attempt to situate him against many of his Hollywood peers, many of them white straight men who are not tasked with bearing so much of themselves in conversations like these. It doesn’t feel like he’s correcting me, as much as inviting me to think more critically.
“I am a first. I am a trailblazer. I am a leader. It is a requirement for me to show up in these spaces and tell what my history is because people need to learn it. It’s new. We, on the side of being the people who educate, have to be open and understanding of the fact that they don’t know,” he explains. “Don’t be mad ’cause they don’t know; show up and educate. I now have the resources and the platform to do that. I’m not going to be mad about that. That’s fantastic.”
At this point, Porter gets up and places his leather harness over his T-shirt, which reads “GAY AF.” “I really do believe so much of our LGBTQ+ activism is performative. It’s always been performative, and that’s a really wonderful thing because it’s entertaining, but what is the conversation that comes after the conversation? That is what I am. I’m one of those people that knows how to talk about it once the performance is over.” And with that, he’s off.
Want the latest fashion industry news first? Sign up for our daily newsletter.
Tagsterms:NetworkBilly Porter

Woman Claims She Was Kicked Of

Game of Thrones final season b

Celebrity DUIs – Christopher McDonald was arrested on DUI charges after...