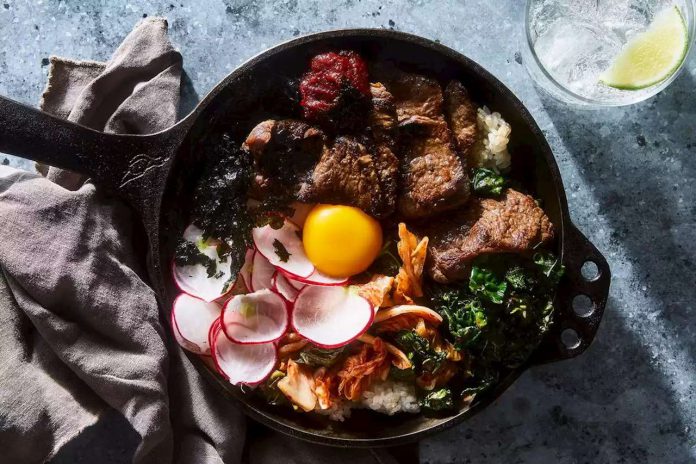 ‘s
high-heat, caramelized glory. Which is why, for my skillet variation, I’ve called for thinly sliced strips of beef short ribs, aka kalbi. Thanks to the high heat of the cast iron plus the salty-sweet marinade, your meat should caramelize gorgeously in the skillet, leaving behind a fond—the gorgeous browned bits at the bottom of the pan—which will flavor the rest of the dish as you build it.
If you can’t find short ribs, then feel free to use skirt steak, tri-tip, or another cut you like to cook.
For a better bibimbap, switch up the vegetables.
Photo by Julia Gartland
The Vegetables
Here’s where I’m especially irreverent to the Korean classic: In a standard bibimbap, you’ll have the following vegetables, all sautéed with sesame oil and seasoned with salt (and absolutely nothing else): spinach, mushrooms, soybean sprouts, julienned carrots, and other boring things.
But because I’m not the biggest fan of spinach in my bibimbap, I’ve replaced it with the much hardier
Tuscan kale (aka Lacinato or dinosaur kale)
, which crisps up and caramelizes in the skillet, tasting almost like chips.

Next, I’ve replaced the mushrooms with umami-ridden
roasted seaweed snack
, which adds a savory undertone that is, for me, hard to replicate. Finally, the boring, soggy carrots (my absolute least favorite part of bibimbap) have been replaced with
sliced radishes
—but even these spicy-bitter beauts have their own punch, quick-pickled in rice vinegar, salt, and sugar for an
agrodolce
-like acidic contrast. And though most bibimbap recipes don’t call for this, I like to add a bit of
kimchi
, for funky freshness and a bit more heat. (Plus, it flavors the rice nicely.)
At the end of the day, the vegetables you choose to add to your bibimbap should be according to your own tastes, what
you

Sarah Ferguson’s message of support for Princess Beatrice on what would...