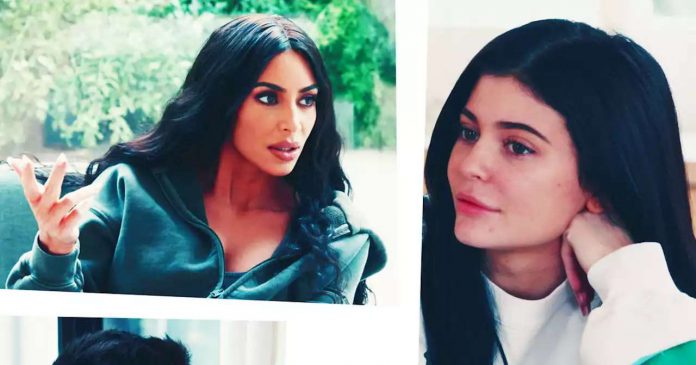 Kris wants to give Jordyn the benefit of the doubt, but one thing is nagging her: Before she knew anything about the scandal, she’d texted Jordyn to ask where Kylie was and Jordyn still hasn’t texted her back. It’s the first time Jordyn has failed to return one of Kris’s texts, and even though she’s hoping the news isn’t true, Kris thinks Jordyn may be guilty or else she’d be blowing up her phone asking how to fix this mess. Kim calls her mother “naïve.” She also tells her that Tristan admitted everything via text, which is news to Kris. Now Kris feels like this is the ultimate betrayal because she considered Jordyn a sixth daughter. As sad as Kris is about this situation, she insists that her main focus is on keeping Khloé calm. This scene was also filmed on February 19, 2019.
Scene 13:
At Kourtney’s house, Khloé explains how she’s feeling to Scott and Kourtney. Emotionally depleted, Khloé mulls over everything Tristan admitted, and she worries about his mental health. Apparently, he told or insinuated to her that this has driven him to seriously consider suicide; concerned, Khloé has one of Tristan’s closest friends check up on him. Scott is amazed that she is even considering Tristan’s emotions with this. She gets word that, although Tristan wouldn’t let the friend into his house, he’s “good.” Kourtney tells Khloé it’s okay for her to let out a string of nasty words, because this is a nasty situation. It’s a great idea, but Khloé says she’s not feeling much of anything except heartbroken. She adds that this has been not only humiliating but a blow to her soul. This scene was filmed on February 20, 2019.
Scene 14:
Making the rounds, Khloé lands at Kim’s house for a conversation with Kim and Kylie. Each sister seems appropriately shell-shocked. Khloé is still disgusted and can’t believe Jordyn didn’t think of Khloé, True, Kylie, or even herself. We all know Tristan is a dirty pig, but they’ve never seen this behavior from Jordyn, which makes it more confusing.
Kylie spoke to Jordyn at length and says Jordyn was crying the entire time, but Kylie says she told Jordyn she was now “scared” of her. If Jordyn could do something like this to her family and wake up with a smile the next day, what else is she capable of? Plus, in the past, Jordyn used to always text Khloé if she saw Tristan out, but the night in question was different. Jordyn is now downplaying everything that happened, claiming it wasn’t sexual or intimate, which is the opposite of what she initially told Khloé.
For Kim and the rest of the family, the major issue is that Jordyn hasn’t said she’s sorry. Kim says she would be on Khloé’s doorstep, begging for forgiveness and admitting how much she’d fucked up. Kim adds that Jordyn should have known better, considering that not only has Kylie allowed Jordyn to live with her but she and Khloé have given Jordyn financial opportunities that helped her support her entire family. Jordyn has ruined these relationships forever, and Kylie admits she’s unsure if she’ll keep Jordyn in her life.
Kris gives Khloé a call to talk about the situation. Apparently, Kris spoke with Jordyn on the phone and she was sobbing and apologizing profusely. Kris feels for her, but she says she told Jordyn that Khloé is her main priority and that until Jordyn makes it right with Khloé, the rest of the family won’t have anything to do with her. Worried about their future with Jordyn, the sisters let out a chorus of “I love you”s to one another. This scene was filmed on February 20, 2019.
Scenes 15, 16:
Kris pops by Khloé’s rental home to check on her daughter. Khloé’s still despondent and is worried about a ribbon cutting she has to do that night; she doesn’t want to go out or have to answer any questions about the current drama. She double-checks with Kris and her assistant to make sure she has a strict 30-minute time limit and devises a plan to cut the ribbon as slowly as possible so she doesn’t have to be bothered with anyone.
She decided to honor her commitment because she doesn’t want Jordyn or Tristan to mess with her coin in any way. And, as Kim said, she needs to provide for her family! If Khloé misses one evening of work, True’s headband collection could be in jeopardy. We can’t let that poor child go without.
After chatting with Khloé, Kris heads to the glam room to have a chat with Everybody’s Favorite Best Friend, Malika. EFBF Malika is Khloé’s date for the event, and as the friend who created the EFBF path that Jordyn once followed, she’s making it very clear that she’d never cross such a line. EFBF explains that both she and Khloé treated Jordyn like a little sister — she could come to them with any issue and they’d be there. Malika also says everyone used to joke about Kylie and Jordyn being the younger versions of Khloé and Malika. Now, as there always should have been, only one Malika is left standing. Well, technically, two.
That night, Khloé solemnly hits the PrettyLittleThing red carpet and, alongside a seriously happy Ashley Graham, cuts the ribbon to officially open the brand’s Hollywood store. In a sick twist of fate or managerial skills, just hours after this ribbon cutting aired, Jordyn took to Instagram to announce a collaboration with PLT’s BooHoo clothing company. What’s worse: stealing someone’s man or stealing someone’s endorsement? These scenes were filmed on February 20, 2019.
Whew! That’s a lot of scandal for the beginning of the week, dolls, and there’s still more to come. Check back next week for another #KUWTKE recap of Keeping Up With Jordyn Was Like Family. #JORDYNSCALLING

Cameron Boyce Cause Of Death Revealed