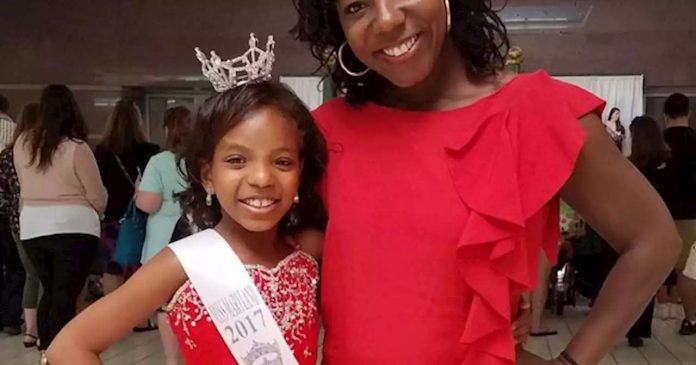 Share to twitter
Share to linkedin
In a world where adjectives like “strong”, “tough”, and “hustle” are the go-to for describing the modern working woman, it’s easy to ignore one of the most important traits in leadership: the ability to be vulnerable. For Nakia Harper, this lesson was one of the greatest she would learn, stemming from one of the most difficult times in her life.
Nakia Harper (right) with her two-time national pageant winner daughter, Ruby (left), prior to the accident. Photo Courtesy of Nakia Harper
For years, Harper maintained a safe division between her personal and professional life. On one hand, she built a reputation that crossed many industries. She created success by being a strategic problem solver, leading fundraising for non-profits such as the American Heart Association and American Cancer Society. She moved on to marketing and account management for accounting firm giants and she finally settled into the role of Director of Corporate Accounts for the Venus Group.
On the other hand, Harper is a working woman wearing many hats. She’s married with three kids, passionate about giving back to her family and her faith and is a consummate athlete. She believed that she was thriving on both ends in part due to keeping a distinct separation of work and life. However, tragedy struck suddenly, and those two worlds collided.
She recalls, “While I was on a business trip, I got one of those calls that no parent ever wants to get, that my daughter had been in a car accident while she was traveling with the church. We were told that if Ruby would live, that she probably would never walk, talk or be herself again.”
Ruby Harper in the hospital.
Photo Courtesy of Nakia Harper
The division between personal and work life was no more, and it was completely out of Harper’s hands. “I’ve always been a believer that work and your personal life kind of don’t really intersect,” says Harper. “I really didn’t have a choice in this instance because my daughter was very public. At the time, she was a two-time national pageant winner. She had just been chosen by Debbie Allen to go on a dance tour nearly two days before the accident occurred.”
When Harper slowly transitioned back into work, she found her colleagues and company were leaning in to help out.

She notes, “Oftentimes when we go through events like that, we don’t really want people to know what’s going on. But it really helped me to learn to be authentic.”
Authenticity is an important building block in creating legitimate, honest relationships.
It goes back to that old advice – just be yourself. It not only creates trust between colleagues, but it can help others learn, as well.
Harper’s company surprised her. In response to her situation, the company adjusted their vacation donation policy and put provisions in place to assist employees during times of need.
Experience inspires change.
And had Harper’s company not known about her struggles, they may have never realized the ways they could improve their employee program. Harper’s story had inspired a betterment of not only herself, but the people around her.
There are defining moments in life where our eyes are opened to details we may have been missing, and this was clearly one of those moments for Harper. She became aware of the difference authenticity in the workplace made and worked to integrate her newfound lessons into her leadership.
For example, following her daughter’s accident Harper used her newfound transparency while interviewing for her current role at Venus Group. Her father was dealing with cancer at the time and instead of hiding those troubles away beneath a “tough” exterior, Harper was upfront with her future employer about her personal struggles. She even declined the position at first, worried she wouldn’t be able to give her best self.
Harper’s three kids Photo Courtesy of Nakia Harper
She explains, “Being authentic doesn’t necessarily mean you have to share everything that you do. But at the same time, it’s really being upfront with when you have something going on that’s going to preclude you from being efficient and effective at work.”
In reflection, Harper believes that authenticity can be an accelerate. “I think that truthfully in my career, I probably may have excelled quicker had I been more authentic. I have seen various women through the course of my career and more recently, mentors who really are genuinely authentic. Authenticity lends itself to being more open and understanding, but also being more productive in understanding.”
Follow me on

One Writer Tries to Eat Her Way Through Hong Kong’s 14...