Home Woman What it’s like bra shopping with two dads 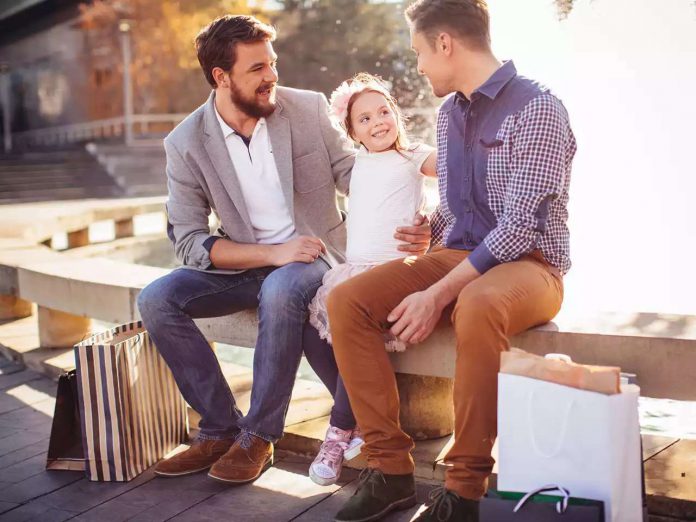 two gay dads
.
Our daughter and son have been with us for five years. We adopted them at ages five and four respectively. As a gay male couple, we’ve been asked again and again to answer the question: “So how will you ensure your daughter has female influences?” The list of women in our support circle, including a grandmother, an aunt, and several close friends was enough to stave off any doubts from our social workers during the adoption application process. Their professional approval instilled in us confidence that we could raise a daughter. Besides, we told one another when our kids first moved in, we would no doubt be ready when the time came—puberty was years away.
Oh, how time flies.
The tricky questions began last winter, when our daughter was just nine years old.
“How does a baby exactly get inside a lady?”
“Why don’t I have a big chest yet?”
“But what if I don’t want to have a spotty face?”
Agitated Googling ensued; I frantically typed search terms like “
first periods
,” “training bras” and “Help, my daughter’s hit puberty!” into the search box. After long evenings of looking for answers online, we turned to our girlfriends for next-level enlightenment. Our initial concern that our daughter was starting puberty too early was assuaged when we learned from a girlfriend that she too had begun developing at age nine, and that it was not uncommon.
I threw up my hands in a display of
who knew?
Our daughter looked so relieved when we passed along nuggets of information; when I told her with a fledgling air of authority that some of the things she was experiencing were all part of growing up and becoming a woman, her confused embarrassment transformed into eager pride.
Our daughter has always been incredibly hungry for the next adventurous experience. This is the little girl who wanted to spring from the top diving board despite having no actual swimming lessons under her belt, the girl who unflinchingly tackled the boys at soccer training; the girl who scoffed at penguin skating aids—“No way, Dads!” Her first forays into adolescence were no different. “So, when can I get a bra?” she asked in a coffeeshop, mid-debate about Shawn Mendes.
The world of breasts and bras is totally alien to me—you’re talking to a Gold-Star Gay here. But after putting in some hours reading customer reviews on Yelp, I’d figured out that Secrets From Your Sister, a bra-fitting boutique in Toronto was
the
place to bring my daughter for her (and my) initiation. We got the clear sense it was a place that celebrated the feminine form in all shapes and sizes—exactly the spirit we wished to instil in our daughter.
On arriving at the boutique, with our daughter and her little brother in tow, we stepped inside to see walls festooned with brassieres, knickers, thongs
et al
—a proud and lacy display of womanly empowerment. It was surprising to see our girl’s habitual gung-ho demeanour slip into bashful anxiety. “Can you and Daddy G come into the fitting room with me?” she asked my husband, slipping her hands into his and mine. “Of course we will,” he responded. “We’ll be there all the way.” As it turned out that was a lie.

The lie was not deliberate in any way on our part. Within minutes of walking through the door we were told that the store operated a women-only policy in the fitting area, which they could not waive, even for a pair of gay dads. My husband and I exchanged agitated scowls over whose duty it should have been to check this out first. Eye rolls followed. The attendant ensured us she was completely sensitive to the situation and would keep our daughter’s comfort top priority. In hindsight, we realized that this was the right move—a first step in communicating to our daughter she could have privacy as a young woman and that we as her parents would respect it.
Upon successful fitting, our daughter took great pride in selecting her bras and telling us how good she felt in them. And there she was, shoulders back, her chin thrust forward in gallant defiance of anything hormones might throw at her! As we left the boutique with her practically skipping out the door, my husband and I exchanged proud looks filled with melancholy. In a moment of light relief, her brother piped up from between us, “So when can I get one?!”
My husband and I have always taken a very open-door approach with our children, answering any question they have as honestly as possible, in an age-appropriate way. Birds-and-bees conversations so far have meant
discussing sex
in terms of baby-making, with an emphasis on the miracle of biology. We check in with them often to find out what’s on their minds, but we recognize that there’s a fine line between the inquisitive probing that you must do as a parent and the importance of respecting privacy—particularly when it comes to the sensitive relationship between dads and daughters.
A child’s body is
their
body and they shouldn’t feel the need to relinquish it—or knowledge of it—to anyone in a way that makes them uncomfortable. So we repeat to our daughter regularly that if she wants to talk about anything it doesn’t have to be with us; there’s also Auntie, Granny and any one of our female friends. So far, “No need—I don’t have any more questions: You’ve answered them all,” has been her reply. Time for a two-dad hi-five!
Now, we’re
preparing for the arrival of her first period
. Our chats these days run the gamut from mood swings to cramps, and we’re doing as much as we can to prepare her for what’s to come.
Questions pop up on random occasions, and we’re getting into the swing of things now, after our initial panic. “Daddy, Daddy G, my chest is sore and hurts,” she volunteered just the other evening. After a little sensitive discussion, we came to the conclusion that her breasts had indeed started to bud, and that the tenderness she was experiencing was all part of the process.
“You mean I’m growing up?”, she eagerly asked.
“Yup, it sounds like it”, my husband responded.
“Yes!”, she exclaimed, fist-punching the air before running off to finish getting ready for bed. We both sighed as she left the room, not because such conversations are uncomfortable—we’re over those early nerves—simply because she’s growing up so fast.
Read more:

Sophia Bush Is Dealing With Her Mental Health During the Pandemic...