Home Woman Are Toilet Bowls Truly Too Short for Some Men’s Junk? 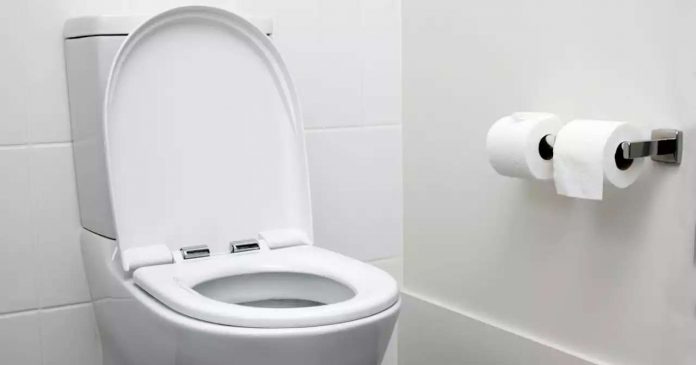 A depraved investigation inspired by the “Masculine Toilet.”

Photo: George Mdivanian/Getty Images/EyeEm Our current political reality is such that, when I learned that acting attorney general Matt Whitaker once sat on the board of a company that offered $1 million to anyone who could provide evidence that Bigfoot is real, I found myself completely unfazed. After all, Virginia just elected a congressman who writes Bigfoot Erotica. The Bigfoot Overton Window had already shifted.
However, the topic of penises dunking into toilet bowls has not been breached nearly as frequently in the public discourse — hence why I paused when I learned that the same company, World Patent Marketing, once applied for a patent for something called the “Masculine Toilet.” The Masculine Toilet, for the blissfully uninitiated, is an enormous toilet bowl specially designed for people with huge dongs. “The average male genitalia is between 5” and 6”. However, this invention is designed for those of us who measure longer than that,” the press release reads. “It is therefore an object of the present invention to provide an improved, sanitary toilet bowl which prevents contact from male genitalia with potentially unsanitary surfaces of the toilet bowl.”
The “Masculine Toilet.” Photo: www.prlog.org I, finding myself truly haunted by the big boy toilet, said as much on Twitter. “One time in college a friend of mine didn’t realize he had a huge dong and tried to have a relatable gripe to a bunch of us about how it’s so annoying when your weiner hits the toilet water,” my pal Matt Lubchansky replied. “So evidently it’s a real problem in the big dick community.”
I then found myself ruminating on an even more cursed question, one that I had never considered in my 29 years on Earth (or at least in the 24 or so years since I found out penises exist): Are penises just constantly touching the inside of toilets, everywhere, all the time?
A quick Google search yielded over 700,000 results for the phrase “penis touching toilet bowl,” hundreds of which came from the Bodybuilding.com message boards alone.

One person visited MetaFilter with a grim predicament about their new office’s toilet: “When I sit down, my penis rests against the inside of the front of the bowl unless I push it down by hand. But it’s hard to wipe up after and prevent it from touching the sides of the bowl accidentally.” A tangential, and far more common concern, involves genitals hitting the toilet water; there are multiple Urban Dictionary terms for both the bowl and water phenomena. It’s apparently enough of a concern that a testicular “sanitary shield” toilet attachment was patented in 2014.
Once I established that there was a widespread epidemic involving the intersection of penises and toilets, I urged men to tell me about their own plight. “I recently moved into a new place and was so hyped about having my own bathroom, but the toilet bowl radius is so small, ”one shared. “It was such a bummer because I know I’ll truly never find solace in that bathroom.”
I soon learned that this issue had less to do with the size of the penis and more to do with the water level in the bowl (and a high water level is more common in American toilets than those abroad). “This can be a problem for someone with a penis of just average size, too,” another man was quick to offer up. “Sometimes the scrotum has enough slack that one’s testicles can dip into the toilet water when seated if the water level is particularly high or the toilet particularly shallow. It’s extremely unpleasant.”
So is the “Masculine Toilet” not a mockable invention, but a necessary innovation? Not so fast. “Labeling something ‘a toilet for hung men’ convinces men that their dick is too big for normal condoms or toilets so they HAVE to use this premium product to solve a non-existent problem,” a man who admitted to not having a “monster hog” theorized. “So I think that’s the heart of the matter — a capitalist exploitation of male size anxiety literally an Ouroboros of men eating their own (completely average sized) dicks.”

How to Tell If Your Laundry Detergent Is Messing With Your...

Katherine Heigl to Star in and Executive Produce Netflix Adaptation of...