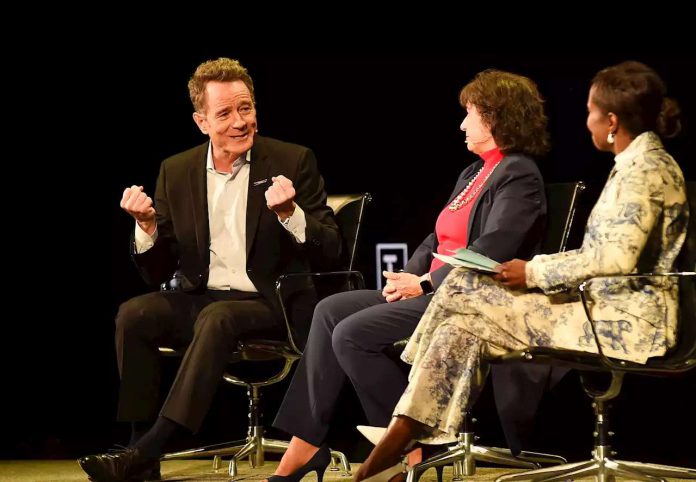 Photo Credit:Women in the World

Actor Bryan Cranston opened up about his mother having the progressive disease, which women have a 1 in 6 chance of developing, and a researcher offered hope.

Roja Heydarpour
04.12.19
Bryan Cranston, Actor, Producer and Author, Roberta Diaz Brinton, Director, Center for Innovation in Brain Science, Deborah Roberts, ABC News Correspondent, on at The 2019 Women In The World Summit in New York City; 4/12/2019
Early signs of Alzheimer’s — forgetfulness, quirkiness, not paying enough attention — are often overlooked by families. It’s only later, when the disease progresses, does it become clear what was happening all along.“I’m rather ashamed to admit that at the time that you start to see a change in your loved one, I was starting to get a little irritated at my mother,” said actor, producer and author Bryan Cranston. His mother had Alzheimer’s but, he said, he thought “she was just being careless.” Cranston was at the 10th annual Women in the World Summit in New York City Friday to talk about how Alzheimer’s impacts women, alongside Roberta Diaz Brinton, director of the Center for Innovation in Brain Science.Deborah Roberts, an ABC News correspondent, empathized with Cranston. “I remember being upset my mom was forgetting things, my birthday,” said Roberts, who moderated the discussion and whose mother had Alzheimer’s.
Of course, there may be one moment when what’s really happening becomes clear.
In Cranston’s case, he said, his mother was taking a long time to get dressed one day. When she finally accepted help and let him into the bedroom, he found that she was trying to put her arms into her pant legs.
Sixty-six percent of people affected by Alzheimer’s in the United States are women, half of their caregivers are women, and women of color are disproportionately affected.

Brinton captured the primacy of the brain with a compelling analogy: “From the neck down, we’re a Prius, from the neck up, we’re a Hummer.” She explained that metabolic and vascular health is key to brain health. “Women of African origin have a higher risk of cardiovascular disease,” she said, “that’s a delivery/fuel system to the brain.
Scientists have attributed the higher number of women with Alzheimer’s to the fact that women live longer, but Brinton said there’s more to it.
“It turns out that it’s not because women live longer,” she said. “It’s because they start the disease early. … It can start in perimenopause to menopause.”
AARP CEO Jo Ann Jenkins, who introduced the panel, advocated for putting more resources into finding a cure. She said AARP had given $60 million to the Dementia Discovery Fund to support work on advancing treatments.
Absent a cure, Brinton suggested that women think about maintaining metabolic health, avoiding Type 2 diabetes and reducing inflammation. She also mentioned happiness: “We think of happiness as a luxury, and that happiness in many respects has no real value. All you have to do is be unhappy or be around an unhappy person to know the value of happiness. Happiness lifts us, frees us, creates the world of possibility.”
According to Brinton, there are promising trials that suggest the “Alzheimer’s brain can actually regenerate itself.” Ultimately, she’s hopeful. “We have more work to do,” she said, “but I’m telling you, women are on it.”
Additional reporting by Laura Macomber.
Related

For More Details : Women in the World

A Big Batch of Big Beans Is a Big Help When...