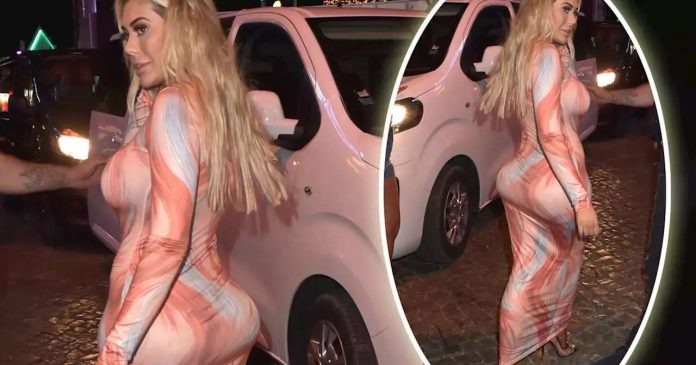 Chloe Ferry filmed scenes for Geordie Shore alongside her co-stars in Portugal.
The 23 year old confirmed she was returning to the MTV show – after previously revealing she was quitting following her split from Sam Gowland.
Dressed to impress for the evening’s antics, the reality star sported a patterned skin-tight maxi dress for the occasion.
Highlighting her exceptionally pert bottom, Chloe’s surgically enhanced physique was on full display in the eye-catching number.
Adding height to her frame, she completed her look with a pair of heeled sandals while her long blonde locks hung down her back.
Chloe’s return to the hit show comes amid reports that she and Sam are back together.
Speaking to The Sun Online, a source said: “Chloe has totally forgiven Sam and is giving him a second chance. It’s been tough but he’s
begged for her back and she thinks they can still make a go of it.
“She never really quit the show and just said that because she was feeling stressed and was under a lot of pressure.

Chloe will be back filming with Sam next week.”
They added: “The pressures of the show will be a tough test for her and him but if they can get through that, it would be a good sign for the future.”
Chloe and Sam have had a tumultuous relationship, with Chloe reportedly telling him their relationship was over for good following reports he had bedded a fellow Love Island star.
A source told The Sun at the time of their split: “She’s devastated because she feels like she has been taken for a massive fool. Chloe told him it’s over forever, she will never take him back now.
“She’s had to see him because they’ve had this paid PA to do and she didn’t want to lose the cash. Chloe has been trying to ignore him but Sam is persistent and she did really love him.
“But when she found out about him and this Love Island star she went crazy. She was absolutely furious and was seething with him.”

7 Tricks for a Perfectly Packed Suitcase Every Time