Home Woman Lesbian couple say they were called ‘disgusting ‘ kicked out of county... 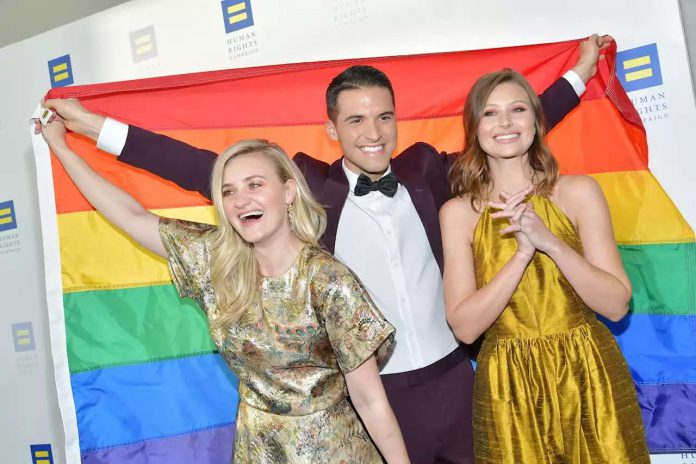 ‘We felt unsafe,’ one of the women said of allegedly being booted out of the show, which took place during the fair’s LGBTQ-supporting event.

A lesbian couple claims that they were kicked out of an Aly & AJ concert on Saturday night at Alameda County Fair in California for allegedly dancing together. According to the couple, the show took place during the Alameda County Fair’s first LGBTQ-supporting Out at the Fair day.
On Saturday, the night of the concert, Twitter user Kayla Marie shared a video of two women surrounded by police officers. The women seem upset as they gather their things and members of the crowd boo. According to the post, the women were kicked out for “kissing and being publicly gay.”

two girls just got kicked out of the aly & aj show at the alameda county fair for kissing and being publicly gay what the fuck bro pic.twitter.com/en78yclDai
— ????? ????? ? (@kaylaberinreyes) June 23, 2019 The following day, Twitter user AyG claimed to be one of the women in the video and shared a series of tweets regarding what happened at the concert.
AyG writes that she and her girlfriend were dancing and”barely touching” when a security guard approached them and told to stop. The guard then also allegedly told them that they were”disgusting” and warned that”there were children” present.

Hey @alyandaj, this is my girlfriend and I. Last night we attended your concert at the Alameda County Fair. While we were dancing (and barely touching), a security guard told us we needed to “stop touching each other”, we were “disgusting”, and “there were children here” pic.twitter.com/nvDVsgxIHw
— AyG (@Aygelz1) June 23, 2019 “We were in shock. We moved back to be with other people who saw the interaction. We were approached again by the same woman who again told us we were disgusting,” AyG wrote, adding that they attempted to get the band’s attention.
“We were kicked out when [Aly & AJ] were collecting money for The Trevor Project. During Out at the Fair. During Pride Month. In 2019,” she wrote.”We have never felt so uncomfortable being ourselves in our entire lives. We felt unsafe. We were scared.”

The only brightside of this horrifying ordeal was the support from all your fans, standing with us. I hope you guys do something about this.

Safety for the people that you so unapologetically support should be the most important thing.
How else are we supposed to live?
— AyG (@Aygelz1) June 23, 2019 According to another concert-goer, Aly & AJ — the pop duo composed of sisters Alyson and Amanda Michalka who debuted on the Disney Channel in 2005 — were informed by the crowd that the couple had been kicked out.

@alyandaj 2 girls were kicked out of the concert for kissing. aly and aj noticed and called out the security guards. not cool aleda county fair, but also praising aly for noticing and saying something! pic.twitter.com/IKWODUEt59
— kaleb (@mistapoet1) June 23, 2019 “Security, please do not do that. This is a Pride event, and we should be able to be whoever we [want], do whatever we want,” Aly told the security guards. After cheers, she added,”That’s why we have to stick up for one another.”
In March, Aly & AJ spoke with Billboard about their Sanctuary tour and how they planned to support the Trevor Project, a non-profit organization focused on suicide prevention among the LGBTQ community, by setting up booths in every city of their tour to collect signatures against conversion therapy.

So far we’ve raised $38,000 for @TrevorProject and 7,690 have signed the petition to end conversion therapy! #bestfans ? pic.twitter.com/WYxsW5mf1K
— Aly & AJ (@alyandaj) June 24, 2019 “We have so many LGBTQ fans, and AJ and I have always been huge supporters of the community,” Aly said at the time.
“Aly and I really feel like this is the year of giving back, and we want to continue that movement. This year it’s all about the Trevor Project, and I think it can hopefully help bless a lot of our fans,” AJ added.”As much as we want our fans to come enjoy our music, it’s also hopefully a moment where we can give back to them.”
Representatives for Aly & AJ and the Alameda County Fairgrounds did not immediately respond to Yahoo Lifestyle’s requests for comment.
Read more from Yahoo Lifestyle:
Follow us on Instagram, Facebook, Twitter and Pinterest for nonstop inspiration delivered fresh to your feed, every day.