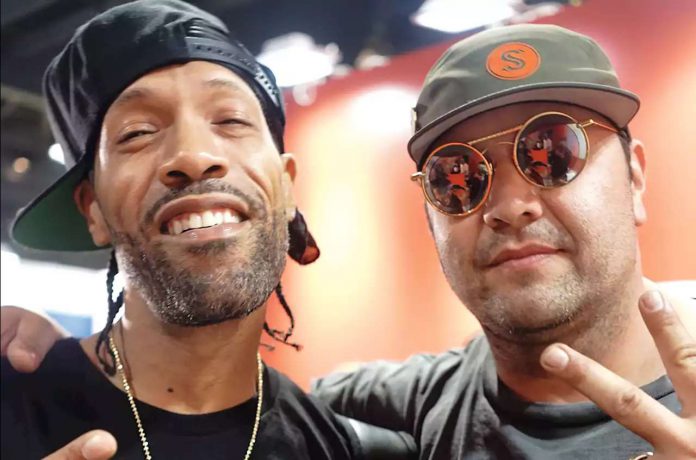 “I’m not the guy who shows up with a pound of weed and rolling papers,” says Mario Guzman, 42, founder and chief executive grower of the luxury lifestyle-weed brand Sherbinskis.

Courtesy of SHERBINSKIS
Guzman (right) with Redman at ComplexCon in 2018.
“I’m not the guy who shows up with a pound of weed and rolling papers,” says Mario Guzman, 42, founder and chief executive grower of the luxury lifestyle-weed brand
.
Forbes
has called it the “Louis Vuitton of marijuana” for good reason: The cannabis concierge service for artists — whether they’re at studio sessions or backstage at major festivals like Rolling Loud — is a bit like a master sommelier when it comes to getting high. “We preselect strains that heighten awareness and creativity,” says Guzman. “I’m there to educate and understand the artist’s needs.”
Cannabis has been legal in California for two years, but visiting artists aren’t often in town long enough to hit dispensaries — which also don’t always stock the highest-quality bud. Enter Guzman, who worked in San Francisco real estate until the late-2000s market crash convinced him to turn his home-grow hobby into a business.

Operating under the quasi-legal framework of the state’s medical marijuana laws and using the pseudonym Mr. Sherbinski, Guzman developed a reputation among local rappers and studio heads, who’d stock up on his much-vaunted product before sessions. When the market went legit, no one was better suited to service music industry creatives.
Today, Guzman estimates he moves $400,000 of product monthly and expects to hit $1 million in monthly sales by the end of 2019. His most popular line by far is Gelato, which he has personally cultivated to sell in flavors like Mochi and Acaiberry. In the last five years, Guzman’s signature hybrid has been name-checked in over 200 songs, with shouts from

Katie Couric grilled on Twitter for Denzel Washington comments ‘No one...

The Raconteurs Surprised NYC with Their Smallest-Ever Shows