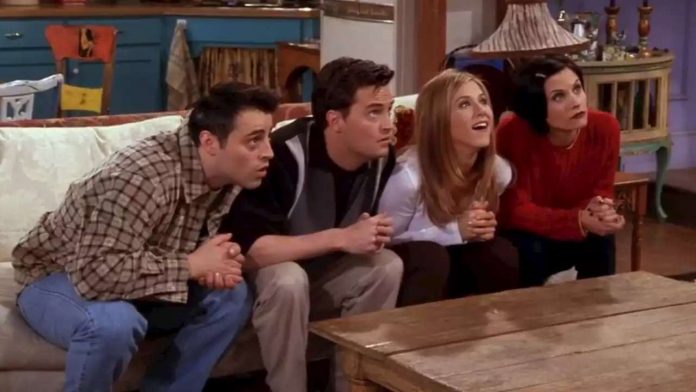 The furniture store will debut its very own Friends-inspired collection later this year, complete with Phoebe’s apothecary table.

And the table in question, for comparison.
Courtesy of Warner Bros.
“The One With The Apothecary Table” saw Rachel buying the titular piece from a Pottery Barn catalog, hoping to preserve its commercial origin from the more antique-inclined Phoebe. Ross purchasing an identical table from the same “Colonial flea market” led to escalating attempts to pass off more Pottery Barn merchandise as original pieces, before Phoebe discovered the truth and subsequently came around to the ubiquitous catalog’s convenience.
Thus far, Pottery Barn’s depiction of the items include only the “apothecary table,”
Friends
and Central Perk-themed mugs and a throw pillow, though it’s plausible the episode’s birdcage and divider—er, cage from “Colonial bird merchants” and “room separating apparatus”—will be included as well. The show may turn 25 this year, but the “The One With the Apothecary Table” is actually a bit younger: it first aired in January of 2000.
Read More

Now You Can Rent The Runway Inside Of Nordstrom