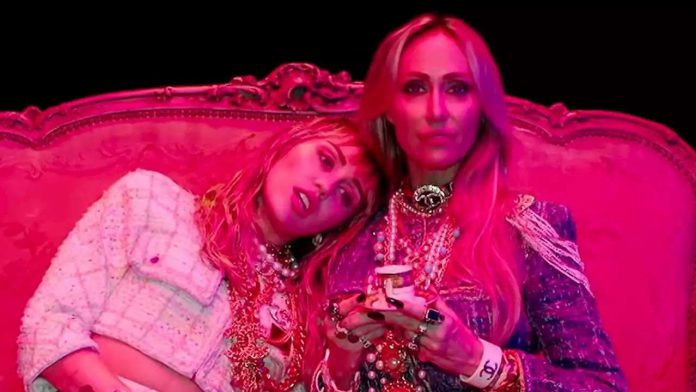 dropped the official music music for “Mother’s Daughter,” off her new EP
She Is Coming
, on Tuesday, and while we can’t get enough of the”feminist AF” singer in her red-hot latex one-piece, it’s hard not to notice the
real
star of the video — her”boss lady” mother, Tish Cyrus.
The sexually charged video, which was conceptualized by Miley and director Alexandre Moors, features empowering messages about everything from freedom to gender identity to inclusion, with visuals like”Every Woman Is a Riot,””Not an Object,””I Am Free” and”Virginity Is a Social Construct.” Tish first appears around the 2:23 mark, clad in a blue dress, black over-the-knee heeled boots and Chanel accessories.
“My mama always told me that I’d make it, that I’d make it, so I made it,” Miley sings from the couch, alongside her tea-drinking mother.”I put my back into and my heart in it / So I did it, yeah, I did it.”

Why Meghan Markle Is Done Playing by the Rules’ After UK...