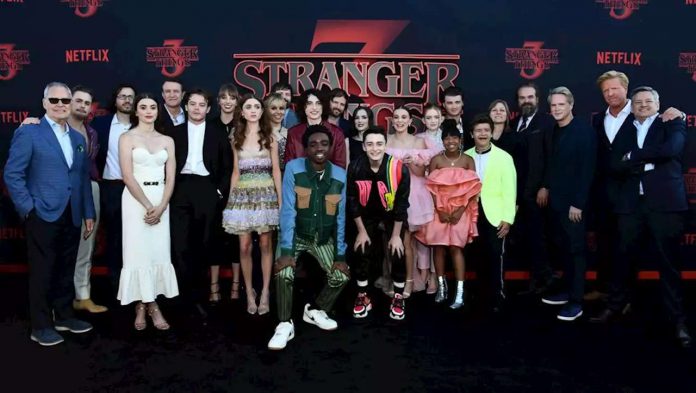 The Upside Down came to Santa Monica High School and the Santa Monica Pier on Friday night when Netflix hosted the world premiere of Stranger Things 3. The streaming giant went all-out to give an i…

and the robust ensemble cast that also included new members Cary Elwes, Jake Busey and Maya Hawke.
Related Story
‘Prism’ NBC Pilot Releases Cast As Talks With Netflix Continue
The new season takes place in 1985 and our favorite pre-teens from Hawkins, Indiana have grown a lot since season one — and a lot of supernatural creepy stuff has happened to them. In particular, Schnapp has been a victim to crazy-creepy monster possession that nearly took his life. This season brings a lot of change and surprises for him. “This season he’s holding on to his childhood, the monster is still lingering inside of him — he’s not fully better yet,” Schnapp told Deadline. “He’s kind of facing that. Throughout the season he’s gotten more mature and he’s gotten more courageous. He’s really grown up.”
Speaking of growing up, Ferguson, who plays Lucas’s (McLaughlin)  sassy little sister Erica will be appearing a little more this season as she lights up the screen as she stares daggers and throws shade at her big bro.
The Duffer Brothers introducing the world premiere of “Stranger Things 3”.
“Erica certainly has a bigger role this season she’ll be on a mission and has a new group of friends,” said Ferguson. She also gave us some info in regards to what we can expect this season. “This season will definitely be darker, scarier and you’ll have a lot to look forward to.”
The screening took place in an auditorium in Santa Monica High which made the premiere feel like a high school assembly. Before screening the first two episodes of the third installment, Netflix chief content officer
Ted Sarandos
to put us in an ’80s mindset by setting the scene for the series before introducing the Duffer Brothers, who talked about how it took nearly two years to make this season and that they literally just added the last visual effect a couple of days ago.

After the screening, the crowd migrated to the Santa Monica Pier which had been transformed into a retro Hawkins Fair. The
Stranger Things
attraction included carnival games, in-show experiences a Demogorgon Curiosity House, slimy dunking booth, Scoops Ahoy desserts and a Hawkins Ferris Wheel.
The fear was not
just
for the premiere. The
Stranger Things-
themed fair will remain at Santa Monica Pier June 29-30 to celebrate the premiere of the show. It will be open to the public and free of charge. This immersive experience will head east to Coney Island in New York. A Hawkins fourth of July fireworks display will kick off the special event that will add
Stranger Things
flair to Deno’s Wonder Wheel Amusement Park. The event takes place July 5-7.
Stranger Things 3
takes place during the summer of 1985 in Hawkins. School’s out, there’s a brand new mall in town and Mike and the guys are on the cusp of adulthood. Romance blossoms and complicates the group’s dynamic, and they’ll have to figure out how to grow up without growing apart. Meanwhile, as expected, a familiar and evolved danger looms. When the town’s threatened, the gang has to band together to survive.
Stranger Things 3
premieres on Netflix July 4.
Subscribe to
and keep your inbox happy.
Read More About:

Rob Kardashian Is Back at the Gym Day 1

Watch ‘The Politician’ Cast Insta-Stalk Each Other

Janet Jackson says her brother Michael’s legacy must live on through...