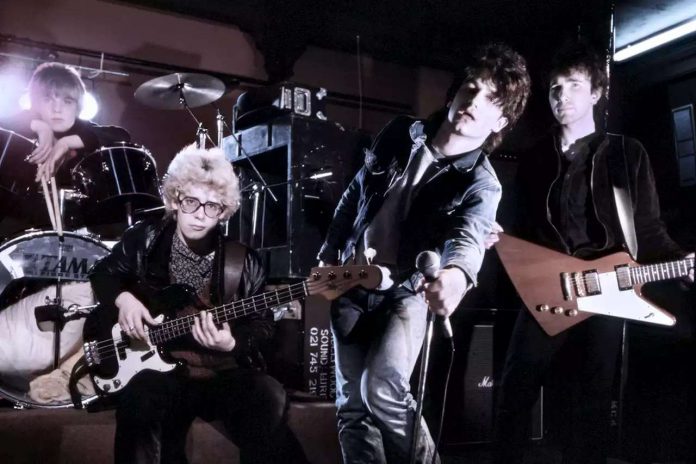 This August 11th, 1979 show at Dublin’s Dandelion Market was taped by a guitarist in the band’s opening act and sat unnoticed for decades

captures U2 at a pivotal point in their development. Songs like “Out of Control,” “Stories For Boys” and “Shadows And Tall Trees” that would later appear on their 1980 debut
Boy
were just coming into focus. Early songs they’d later deem unworthy of release such as  “Cartoon World” and “Street Mission” were still in the set, but most intriguing is the presence of “In Your Hand” and “Concentration Cramp.” Neither song has ever been heard before (though “Concentration Cramp” is very similar in structure to “Live My Life Tonight,” another early U2 song) and it’s possible this recording is the only place where they appear on tape. The full recording from this show hasn’t been released, but you can hear samples of “In Your Hand” and “Confrontation Camp” right here.
The same month as this show, U2 entered Dublin’s Windmill Lane Studios and recorded their debut EP
Three
, which includes “Out of Control,” “Stories for Boys” and “Boy-Girl.” It would be nearly a year before they recorded Boy and finally started touring outside of Ireland.
The discovery of the Dandelion Market tape is the latest project by the
team.

Their exhaustive website is an attempt to chronicle every U2 show in history in as much detail as possible. They’ve lately added many new early shows after combing through back issues of
New Musical Express, Sounds, Record Mirror
and
Melody Maker
along with several newspapers and other publications.
“At the British Library, we reviewed old-school style — page by page — nearly 900 print publications containing some 52,000 individual pages of music periodicals,”
they wrote.
“We obtained photographs and scans of anything related to U2: live concert advertisements, gig reviews and interviews. By combining these findings with the clippings obtained via the Ireland and U.S. newspaper archives, we think we’ve created the most thorough and significant detailed analysis ever of U2’s early shows — with nearly no audio recordings in existence.”
It’s unclear what’s going to happen with the full Dandelion Market tape, but hopefully it winds up in the hands of U2 so they can release it in some form despite its subpar sound quality.
In This Article:

Ali Wong Would Appreciate It If You Never Asked Her This...

How to Stay Calm and Productive While at Home During the...

Browse Over 160 July 4th Sales to Shop This Weekend