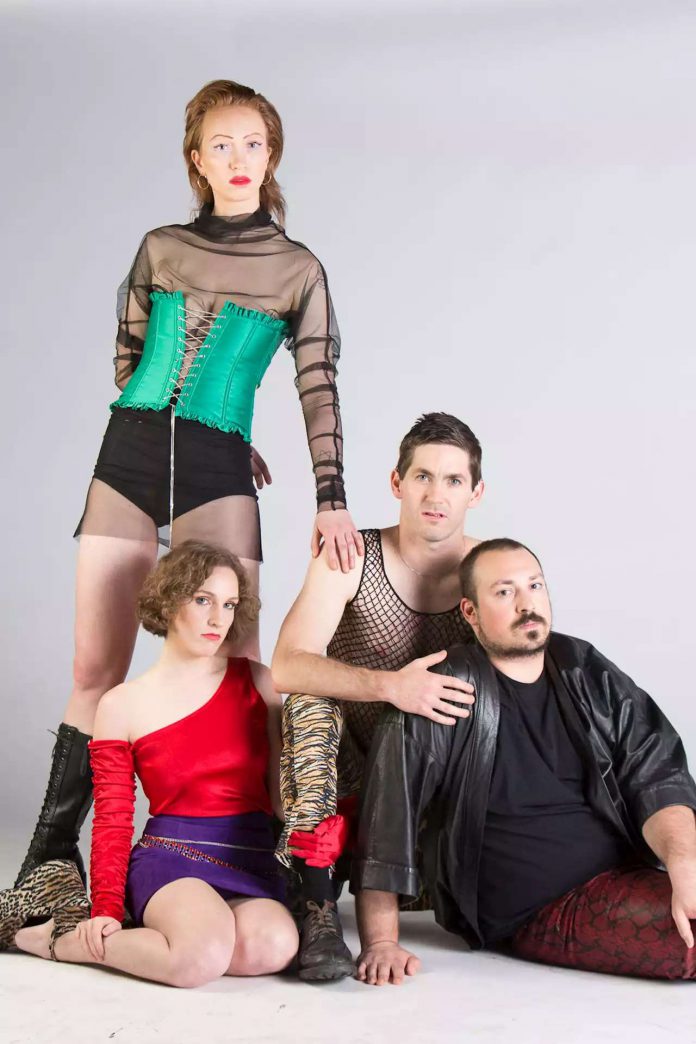 The lead singer of French Vanilla talks with former teacher and video artist Stanya Kahn about messy wordplay and their new album, Why Am I Not Myself?

and
Interview
recently listened in as the two discussed the façade of performance, messy wordplay, and their favorite flavor.
———
MARK BURGER: How did you two meet?
SALLY SPITZ: I think it was in 2011 in Stanya’s genres class at UCLA. It was a meaningful class for me as a fan of her work, and also because she introduced me to some of my favorite performers and musicians, who I hadn’t known before, and who really influenced me and shaped my musicianship. I’ve just always felt really grateful to Stanya for that.
STANYA KAHN
New Genres
program has performance and performative work under its umbrella, it was pretty rare to get someone who really was a performer. And then here comes Sally who was just full-on excited to be exploring performative actions and video and being in her body, and singing, and making music and costumes and sets. I was like, “Oh, hi, hello, bundle of energy.”
SPITZ: It was one of those moments where I don’t know how I existed before it. I identify with what you’re saying right now, about being in the moment and in the body. You deal with it a lot in your video work.
KAHN: I think there’s something that sometimes gets disconnected in the brain that’s pretty common in the art schools. The first time I ever taught UCLA, I had the students doing all this physical stuff and improv on the first day, and I lost half the class. I think I ended with maybe four or five students left at the end who were willing to get weird.
SPITZ: It’s hard to be vulnerable. You have to reaffirm yourself all the time, and it really helps to get that kind of support and verbal affirmations with someone, especially with the history of art-making and the world being dominated by the male voice and perspective. To not look to that as the model or the mold, but to create your own language and to use your own body, I think it’s really vital.
KAHN: I think it’s scary for people. There’s so much pressure to try to fit in so many squares and boxes.
SPITZ: I’ve been re-watching a lot of your videos, and I love the unpredictability of your voice and your command of your subconscious. It’s really hard to tell what’s improvised and what’s pre-prepared. The one where you’re on the beach where you’re this weird, liberated, burn-out. I know you use the character
Lois
. I love that she’s this rock-n-roll mystic or something, who’s also a preacher and a psychic and has this weird witchy-ness.
KAHN: You’re not the first one who’s referred to her as a burnout. In my mind, of course, she’s so completely straight-edge. She’s just pure id. The line between her and myself is pretty thin. Being a quote-un-quote character is more than just sliding around to different states of being so that certain things can be said that might not be said if I were in my normal state of control. It’s like if you could change channels in your brain, and flip a switch and another voice can come through, but they’re working with all your material that’s inside you.
SPITZ: Hilarious and disturbing and amazing all at once.
KAHN: When you’re singing in the band do you feel like you’re being Sally, or a character?
SPITZ: I pay a lot of attention to the façade of performance, and I always have this hyper-awareness of my body and fear of the way that people could perceive me or misinterpret me. I have what I’ve prepared, and then in order to connect with audiences in an authentic way, I’ll try to improvise a joke or bring humor in as a bridge that grounds a performance. I feel like when I’m performing, it’s like I’m selling something.
KAHN: For me, in-person, I’m not as confident as Lois. Being in some kind of persona, masked on some level, has always helped me. I think as a woman, as a female performer, there’s so much that can get projected on you immediately, or so much that people will refuse to hear or listen. I always used to mask myself in some way, like wear baggy clothes and broken glasses and put my hair back in a hat and become some androgynous weirdo, so that I couldn’t be sexualized, so that I could get to the stuff that I was interested in without having to slog through all these other framings of the female performer.
SPITZ: As someone who’s experienced the trauma of male-dominance throughout my life and coming to terms with that, I don’t want to allow any entry point. I don’t want anyone to think that I’m only my body, that I’m only a sexual object.

We’ve gotten weird comments on YouTube videos that are just purely based on how we look.
KAHN: The internet introduces this whole other, crazy wilderness of assholes. You have to keep remembering who you’re making your work for. There are lots of cool, interesting people who will take you seriously. And then there’s going to be a bunch of douchebags who are like, “Oh, I see your legs.”
SPITZ: This anxiety that I feel about people looking at my body is something that I also try to make music about or perform in some way.
KAHN: I’m really interested in that little gap between anxiety and ego. [My character Lois] has all this courage to speak her mind, but it’s coming out of the most desperate lonely place. Some people talk about Lois like, “Oh yeah, she’s crazy and rambling,” but I think she seems really sane and is putting her finger right on the pulse.
SPITZ: I can see how people would think that maybe you were channeling a lunatic of some kind. It’s hard to look at someone who is obviously lonely and maybe mentally ill. I think on social media, you are creating a persona that is refined and scalable. Then the pain of actually being out, and having to talk to someone or confront them, and knowing that you’re not what you project on this other platform is a whole new experience. You really want to be understood by people and be loved by people. You want people to like your post or what you’re putting out. I want people to like our music, but I also want it to be challenging those norms.
KAHN: As long as you’re making it on your own terms, I think that’s important, as opposed to thinking, “This is what will be successful.” Even if you’re trying out new things or challenging oneself, there’s got to be some integrity there. Otherwise, everybody sees right through it.
SPITZ: I feel like I’ve had to do a lot of convincing not only for myself, but also for my parents and other people, convincing them of the legitimacy of my creative work. It’s a lot easier to collaborate with other people, because I feel like I couldn’t do this music thing without my friends and my bandmates. I get too inside my own head, and I have to connect with other people and bounce things off of others before I can feel okay about putting something out.
KAHN: I’ve been working solo for the past 10 or 12 years, and I always bug my friends or call people, like, “Is this stupid?” Your own mind can become an echo-chamber and it’s so important to get critical perspectives from outside to help you see what else you might not have been seeing. But bands are such a cool, particular thing. A band is a family group. It’s like an organism, you have to work together.
BURGER: The name of the band is French Vanilla, and I have to know, is that your favorite flavor?
SPITZ: It’s a gorgeous, delicate flavor. The band name has been a subject of much contention over the past few years. We’re like, “Why did we call ourselves a coffee creamer or flavor?” Because now, that’s the only thing that people will associate us with. Either coffee creamer or ice cream.
KAHN: Where did it initially come from?
SPITZ: We were at a point where we needed to pick something. But yes, it’s my favorite flavor because I love my band. It goes back to using humor as a mechanism for communicating more philosophical ideas.
KAHN: Naming is heavy. Language is so powerful.
SPITZ: I really appreciate anyone that uses language in deviant way or a deconstructive way. I try to do that with writing lyrics. I want the work to be the thing itself, in a way. The sound, the emotions involved. One of my primary concerns writing for the band is language deviancy. I think limiting language is this like oppressive, right-wing thing. I always want things to be messy and without a single meaning. And with this new album being out in the world, it’s really been interesting and crazy for me to see the different ways people interpret work once it’s out of your hands. It’s exciting when you lose control in a way.
KAHN: People are going to go, “Oh so this is a song about a homeless, rambling, crazy person.” And you’re like, “No, that’s a song about my friend Lois and she’s really smart.”
SPITZ: [
Laughs
] Exactly. Lois, oh my gosh. She is so smart. She’s my God, leading me through what’s left of civilization.
———

‘He is a brilliant but complicated person’ Kim Kardashian West breaks...

Little Mix’s Jade Thirlwall has reportedly split from her boyfriend of...