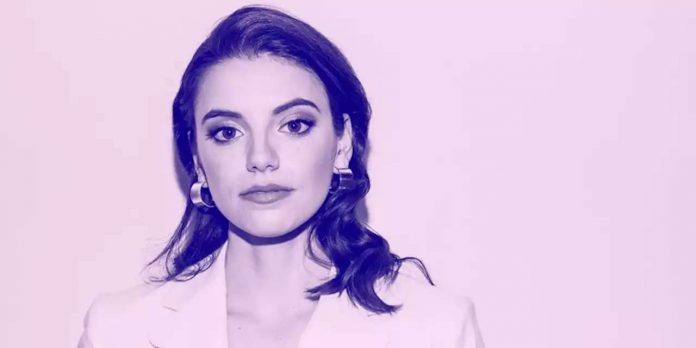 Go inside the mindset of the mysterious new character, Heather.

Francesca Reale photographed by Maridelis Morales Rosado for W Magazine.
Following the show’s cancellation, Reale got her first movie role with the independent film
Yes, God, Yes
, a drama about a young Catholic teen’s sexual awakening. “I nagged my entire team to follow up as soon as I auditioned,” she recalled. “I was a psychopath.” The movie, which co-stars Natalia Dyer, Timothy Simons, and
Alisha Boe
, premiered at the 2019 SXSW Film Festival to rave reviews. “It made me so happy that people enjoyed and it more so that people connected with it,” she said. “At our first screening, a lot of people said that they had that experience in the Catholic Church.”
After wrapping on the film, Reale was presented with an opportunity to return to Atlanta once again—this time, for a role on
Stranger Things
. At first, Reale auditioned for Maya Hawke’s role, before being brought to read for Heather. “My team called me back and said, ‘We have a smaller role that’s reoccurring, are you interested?’” she explained. “And I was like, ‘Heck yes.’ I would’ve done a day player role.” Because the plot of Heather was so secretive, she had to audition not with actual sides from the show, but instead, Drew Barrymore’s iconic opening scene in
Scream
. Her performance was convincing enough to score the role. “I knew as much as everyone else knew about the part at the time,” she said. “She was a lifeguard who worked at the community pool, and that was it. A week before I flew out, they gave me the whole shebang.”
Reale filmed on and off for five months, arriving as a newcomer to the very established set—an intimidating experience for any actor. “It’s scary,” she said.. “It’s such a popular show and it has such a big fandom, that when you’re going in, you’re like ‘I have to bring my A-game.’ You also don’t want to disappoint the fandom. You’re a new addition to this world that a lot of people care about. That’s really nerve-wracking.
“I was so nervous that everyone was going to be strict or cold or not actually be friends” she said.

“I was so pleasantly surprised about how welcoming everyone was. I’m sure it happens a lot, but you can go on to a set where it’s like, we’re here for work and don’t really talk once they say cut. But with this, they are such a family and really working together to create this incredible show.”
Ironically, the biggest challenge for Reale came not from on-set intimidation, or even Upside Down monsters, but something even scarier—the ’80s hairstyles. “It was tough,” she said. “They were like, ‘We’re going to give you bangs,’ but they weren’t bangs, they were these little wispy things that I now loather with a fashion. They are so stressful to maintain. And the fashion of the ‘80s, people care so much. The amount of detail and time that people took to get ready… It was interesting to see what our parents went through.”
Without giving too much away, Reale’s role sees most of her scenes at the local pool. “It was hot,” she recalled. “But you really did feel like you were in a different era. They did such a great job of making it look like we were in 1985 And then occasionally you’d see an iPhone popping out.” Making it even hotter—despite being a lifeguard, Heather doesn’t actually get in the pool, ever. “If we’re being honest, my impression of Heather is that with her hair and her makeup, she’s not saving anyone,” she said. “And if she does, her hair is going to sink her down. So now, I didn’t do any lifeguard training because I think my character would be too worried about her nails. ”
There’s also a particularly juicy family dinner scene that Reale counts among her favorite to film. And, fun fact: her dishy delivery of the word “Daddy” comes courtesy of an old college pal from NYU:
Camila Mendes
. “Don’t even get me started on the dinner scene,” she said. “I learned how to say Daddy from my friend Cami, because she says it on her show all the time. It was like, ‘Okay!'”
“I’m so glad it’s out,” Reale continued. “I can’t hold it anymore. By midnight, I’m going to be screaming the entire plot.”

A Live Baby Shark Show Is Coming to a North American...

How to help migrant children families at US border