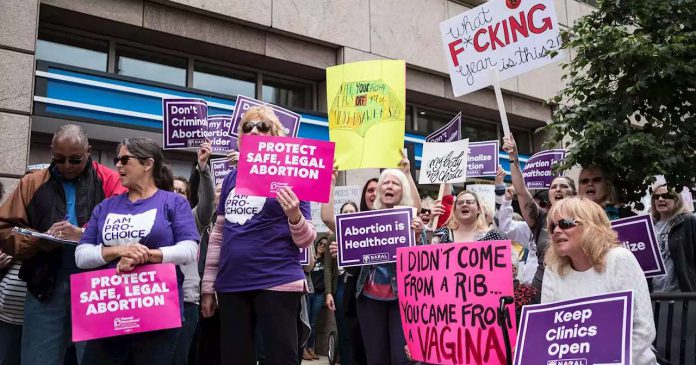 Ohio’s six-week abortion ban has been blocked by Judge Michael Barrett, who called it an ‘undue burden’ on women in his scathing order.

Photo: Megan Jelinger/SOPA Images/LightRocket/Getty Images.
A federal judge has stopped
from taking effect, reports the
Cincinnati Enquirer
. U.S. District Judge Michael Barrett, who is based in Cincinnati, issued a 12-page order to halt implementation of the law, noting
the burden it places
on those seeking the procedure.
“This court concludes that SB 23 places an ‘undue burden’ on a woman’s right to choose a pre-viability abortion, and…plaintiffs are certain to succeed on the merits of their claim,” wrote Barrett in his injunction order. “The law is well settled that women possess a fundamental constitutional right of access to abortion.

Advertisement
Ohio law SB 23,
which bans abortions after six weeks, is one of many similar laws around the country. It was passed in April, after successfully making it through the state’s Republican-majority General Assembly; it was signed the next day by Republican Gov. Mike DeWine. Doctors who performed abortions would be subject to a year in prison and a $2,500 fine; there are no exceptions for rape or incest, though the procedure would be legal to save the mother’s life.
Related Stories

I Used to Wear 2 Fitness Trackers but Ditched Them During...

Emmerdale’s Charley Webb hits out at mummy-shamers with adorable picture of...