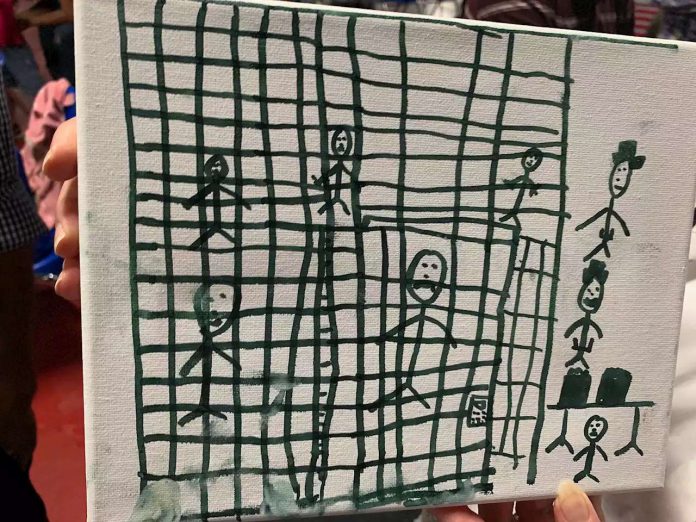 Pediatricians recently released heartbreaking drawings, completed by children under the custody of U.S. Customs and Border Protection, that show the grim realities of what these young migrants are facing as they’re being separated from their parents.
Doctors with the American Academy of Pediatrics (AAP) were given the drawings, which show people behind bars and in cages, by a social worker at the Catholic Charities Humanitarian Respite Center in McAllen, Texas, the AAP tells PEOPLE.
Since being released by the CBP, the migrant children have been staying at the center, which is run by Sister Norma Pimentel and where many families go to “get their first shower, clean clothes and a hot meal after arriving in the U.S.”
While under the center’s care, the children were asked by a mental health clinician specializing in Latino child trauma at the center last week to depict their time under CBP custody on canvases, according to the organization.
Three of those illustrations — drawn by a 10-year-old boy from Guatemala, an 11-year-old from Guatemala, and another 10-year-old child — were then brought to the attention of the AAP due to their particularly alarming content. They were later released to CNN.
Dr. Collen Kraft, a former president of the AAP, said the drawings were incredibly heartbreaking, in part due to these children feeling like they were behind bars.
“The fact that the drawings are so realistic and horrific gives us a view into what these children have experienced,” Kraft told the outlet. “When a child draws this, it’s telling us that [the] child felt like he or she was in jail.”
AAP says it was not immediately clear which CBP facilities housed these children. They also mentioned to CNN that they are working with CBP officers to advise on properly screening and caring for children in their custody, but have made little progress after multiple meetings.
RELATED VIDEO: U.S. Agents Spray Migrants with Tear Gas Before Trump Threatens to Close Border ‘Permanently’
Though the children appear to feel like prisoners, the CBP claims in a statement to PEOPLE that they have been providing “the best care possible” to people in their custody.
“U.S. Customs and Border Protection (CBP) leverages our limited resources to provide the best care possible to those in our custody, especially children,” the group says. “As DHS and CBP leadership have noted numerous times in testimony to Congress and in numerous media engagements that our short-term holding facilities were not designed to hold vulnerable populations.”
“CBP works closely with our partners at the Department of Health and Human Services to transfer unaccompanied children to their custody as soon as placement is identified, and as quickly and expeditiously as possible to ensure proper care,” they add.
RELATED: Families, Fear and Clashes with the Military: The Most Powerful Photos from the Struggle Over Immigration
Amid the controversy, President Donald Trump has seemingly weighed in on the issue.

Her Sorority Sisters Suspected She Was Pregnant What Did Emile Weaver...

A guide to the best outdoor toys for babies and toddlers