Home Woman “There’s a very good reason we all had such a visceral reaction... 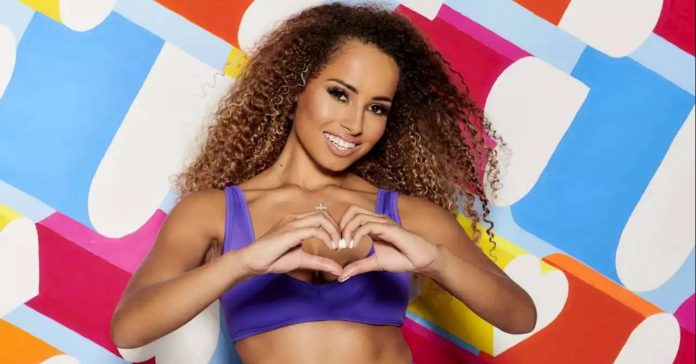 Are you as mad as we are?

has become an on-screen microcosm of the modern-day dating scene, and for many of us, last night’s showdown between Michael Griffiths and Amber Gill hit very close to home.
To paraphrase Ja Rule during the Fyre Festival debacle: we too have been hustled, scammed, hoodwinked, bamboozled.
As the all-knowing, all-seeing viewers of
Love Island
, we’re used to being in on everything. We see both sides of every story. We’re able to spot the fakes and the f*ckboys a mile off. It’s only the poor, unsuspecting contestants who have to work things out for themselves.
You may also like
“Love Island shows us that truth has become the defining trait of modern relationships”
The allure of
Love Island
has always been the triangles, rejections and betrayals – let’s be real, we live for the drama – so why did last night’s showdown between 27-year-old Michael Griffiths and 21-year-old Amber Gill rattle us like never before?
It wasn’t just out of solidarity with Amber, whose composure in the face of Michael’s aggressive
gaslighting
was impressive to say the least.
After weeks of doting on her and convincing her of his commitment, we saw Michael’s head do a 360-degree spin that was straight out of
The Exorcist
.
As soon as he laid eyes on new Islander Joanna Chimonides, he got to work pointing out Amber’s flaws to anyone who’d listen – presumably an attempt to set the stage for the act of betrayal he was planning for a few days’ time.
But it wasn’t even Michael’s brutal dumping of Amber that got our blood pressure up; after all, he is perfectly within his rights to like the look of someone else. No, it was his handling of the situation
after
he’d dumped her that left us reeling.

You may also like
This is the danger of gaslighting in relationships
Amber remained calm and considered during their first post-breakup chat, while Michael raged at her for “raising her voice” and insisted that the sudden breakdown of their relationship was entirely, undoubtedly, her fault.
“You disrespect me,” he told her, latching on to the fact that she laughed at him once – a clear defence mechanism and, frankly, incredibly tame reaction to having your feelings trampled on national television.
His fury was only fuelled by her composure, and so the baiting and blaming continued. “You made me not open up,” he told her, repeatedly calling her “childish” and “pathetic” for no apparent reason.
At this point the word ‘Michael’ shot to the top of Twitter’s trending list, the internet fizzing with a frustration unprecedented in this series of the ITV2 show.
And I suspect it was the one-two punch of recognition and betrayal that got us all going.
Because not only have most of us seen this type of toxic behaviour played out in our own romantic relationships before – we also collectively fell for it, yet again. And it was infuriating.
“Not only have most of us experienced this type of toxic behaviour, we also collectively fell for it yet again”
It felt intensely personal to see such a familiar scenario play out before our eyes, especially when we didn’t see it coming.
Michael’s sudden switch from fan favourite to resident villain caused such a visceral reaction because it undermined our judgement, our perceived ability to sniff out this sort of toxic masculinity with ease.
Want must-binge culture tips and chic interiors hacks? Sign up for the
Stylist Loves Staying In

Border Crisis Sofi’s Choice and the Mothers Fighting Back